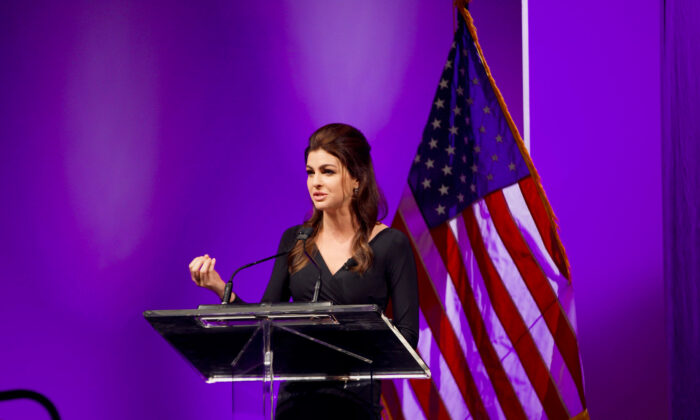 PUNTA GORDA, Fla.–Florida’s first lady Casey DeSantis joined her husband, Gov. Ron DeSantis, on the campaign trail on May 9, in her first public appearance since being declared cancer-free.

The couple made their appearance at a “DeSantis Day” campaign event held at The Villages in Sumter County.

“Governor, I don’t know if this sounds very first lady-like, but damn it feels good to be here,” she told her husband and the crowd of supporters after appearing on stage. “Let me say this, no matter what you’re going through in life, no matter how hard things seem like they are, no matter how hard it feels like you have to pick yourself off the ground, or you feel like your back is against the wall, fight! Fight like hell!”

“After six rounds of chemotherapy, a surgery, six weeks of radiation, and most importantly, through God’s grace, I am elated while humbled to be back on the campaign trail fighting for America’s Governor,” she told the crowd. “I am forever grateful for the prayers from good folks across the country who thought and prayed for me and my family’s well-being. Thank you. I pray my story has inspired people to stay strong and never give up hope.”

Since she has been the state’s first lady, she has taken on several major initiatives, including “Hope Florida–A Pathway to Prosperity,” which she launched through the Department of Children and Families, described as a “family-centered assistance program that is helping more than 25,000 Floridians achieve economic sufficiency.” Another initiative is the Hope Ambassador program, which comprises more than 100 middle and high school clubs in the state, with the aim to “encourage a campus culture of kindness and empathy through peer-to-peer mentoring and volunteer work in Florida.”

Before becoming the first lady she was a former producer and Emmy award-winning television show host for the PGA Tour.

Casey and Ron DeSantis were married in 2010 and together, they have three children–Madison, Mason, and Mamie. Their youngest, 2-year-old Mamie, made history as she was the first baby to be born in the Florida Governor’s mansion in 50 years.

Casey DeSantis said in a statement released after she received her final radiation treatment, “Never ever give up, never ever back down. I am the testament that God is great, that God is good, and hope is alive.”