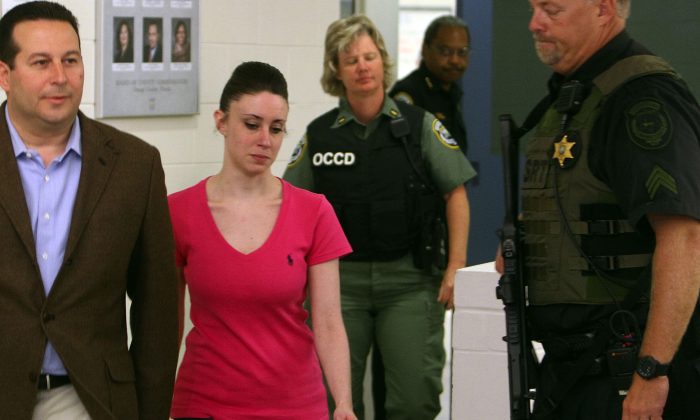 Casey Anthony (2L) leaves with her attorney Jose Baez (L) from the Booking and Release Center at the Orange County Jail after she was acquitted of murdering her daughter Caylee Anthony on July 17, 2011 in Orlando, Florida. It was unknown where Casey Anthony was going after the release. (Photo by Red Huber-Pool/Getty Images)
US

Casey Anthony Reportedly Wants to Have Another Baby

Casey Anthony, the Florida woman who was famously accused and later acquitted in the death of her infant daughter, said that she wants to have another child, according to a report.

A friend close to Anthony, 28, said, “With all the death threats and legal issues, Casey’s kept a low profile but she’s ready to move on with her life,” according to RadarOnline.com. “She’s been in touch with several men who wrote to her in jail.”

The person then says: “She’s picking the wealthiest one and plans on making him the father of her baby.”

Anthony three years ago went on trial for the death of her daughter, Caylee. A number of people thought that she was responsible for the child’s death.

Earlier this year, People magazine and CNN did a profile of her, with her lawyer Cheney Mason saying she stays at home and mostly works as a “housekeeper, clerk, secretary and stuff like that.”

However, she has “benefactors” who provide for her.

“She has a few benefactors that are enamored with her and send her things,” a source close to her told People this summer. “They pay for everything.”

Another source who is close to Anthony’s family added, “She is surrounded by enablers. No one makes her pull her own weight. No one makes her accountable. That’s what got her into this mess in the first place. I, for one, don’t feel the least bit sorry for her.”