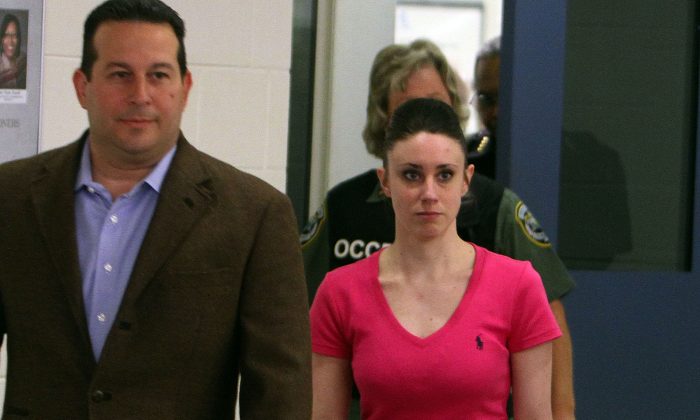 Casey Anthony (R) leaves with her attorney Jose Baez from the Booking and Release Center at the Orange County Jail after she was acquitted of murdering her daughter Caylee Anthony in Orlando, Fla. on July 17, 2011. (Red Huber-Pool/Getty Images)
Crime and Incidents

Casey Anthony, who was famously acquitted in the case of her daughter’s death several years ago, recently started up a photography business.

Anthony’s daughter, 2-year-old Caylee, was found dead in 2008 near Orlando, Florida. She initially told police a babysitter kidnapped her child after she was reported missing. Months later, Caylee’s body was found. Investigators didn’t buy her story, so they charged her with murder, abuse, and manslaughter. The 29-year-old was cleared of the charges in 2011, garnering worldwide attention.

The Daily Mail obtained new photographs of Anthony, and the tabloid reported she is filing papers with a new business called Case Photography, which was set up in November.

In the photos is private investigator Pat McKenna, who helped her in her trial. He also offered her a place to live in his home in West Palm Beach, Florida.

McKenna said Anthony has “a little bit of talent” in photography, saying she has paying customers, WPBF-TV reported. The Mail reported that she set up blogs, a Facebook page, and other sites to showcase her work.

Casey Anthony now has a photography business – with lead investigator from her defense team https://t.co/WDdoDOAnP0 pic.twitter.com/kYuB0nYv5p

A few weeks ago, TMZ obtained photos of Anthony having a yard sale in his front yard.

Casey Anthony Update: Still ‘Most Hated Woman,’ Gets Death Threats, and Has No Freedom

“Do you think I’d have someone living with me if I thought she had killed a baby?” McKenna asked when he was questioned about her innocence. He also dispelled any notions about the two being in a relationship, saying it would be “repulsive” due to their age difference.