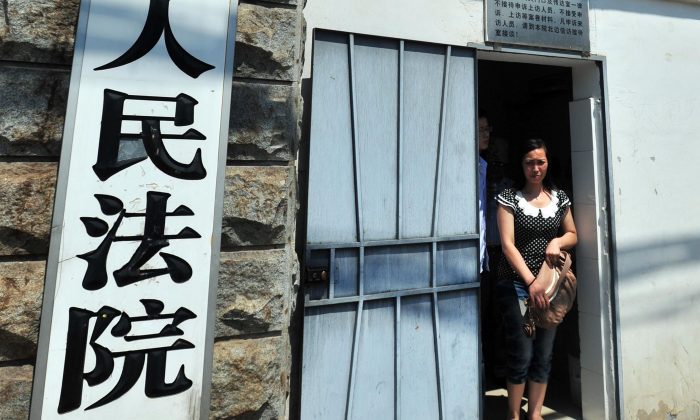 Tang Hui, a mother of a young rape victim, standing in the reception room of the Hunan Provincial Higher People's Court in Changsha City on July 1, 2013. Tang was sentenced to 18 months of forced labor after she successfully appealed for harsher penalties for her daughter's perpetrators. (AFP/AFP/Getty Images)
China

One of the most important cases regarding China’s forced labor camps commenced on Tuesday, to dismal prospects for reform.

The case involved Yongzhou City, Hunan Province resident Tang Hui, who had repeatedly petitioned local authorities since 2006 to bring to justice the perpetrators who kidnapped, raped, and forced her then 11 year-old daughter into prostitution. Her battle against the arbitrary and powerful Chinese legal system was closely followed by Chinese Internet users, who dubbed her “Appeal Mom.”

Tuesday’s hearing made the headlines of many Chinese media organizations, some of them voicing their support for Tang. The Henan Business Daily ran a headline that read, “We are sorry, Tang Hui. It is not you who should be ashamed, it is us who are ashamed to face you. It is the law that is ashamed to face you.” Local residents were also seen gathering outside the courthouse, saying words of encouragement to Tang as she walked past.

On China’s Twitter-like microblogging service, Sina Weibo, there were over two million posts with the search term “Tang Hui” at the time of writing.

The hearing came after Tang Hui refused hush money that the court offered in exchange for withdrawing her lawsuit seeking compensation for the local Labor Camp Committee sentencing her to 18 months of forced labor.

In August 2012, shortly after seven men were finally convicted for her daughter’s case, Tang was sentenced, without trial, for “disturbing social order.”

When news of Tang’s arrest circulated online, an Internet uproar ensued, with many Chinese netizens calling for an end to the “laojiao,” or re-education through labor, system that had condemned Tang.

Soon, public pressure forced the Committee to release her. Tang then sued Yongzhou authorities, seeking an apology and over 2,000 yuan compensation. In April, the Yongzhou Intermediate People’s Court denied her right to compensation, prompting her to appeal to a higher court, the Hunan Provincial Higher People’s Court.

On Tuesday, the hearing at the provincial high court concluded without a decision after four hours. The court said it will announce the decision at a later date, according to a report by the Beijing Times.

The labor camp system allows police to detain people for up to four years without trial. Political dissidents, religious practitioners, petitioners, and those who have committed minor offenses are locked into these detention centers around the country and often forced to do hard labor; the system is separate from the prisons, which belong to the Chinese judicial system.

In January, Chinese state media had announced that the regime will reform its re-education through labor system, but analysts were skeptical of any real improvements to the treatment of the prisoners, who are often tortured and subject to long hours working in filthy conditions.

The possibility of true reform seemed slim at court on Tuesday, when the head of the Yongzhou Labor Camp Committee, Jiang Jianxiang, insisted that Tang’s sentence was not illegal. Tang told AFP in an interview on Tuesday that Jiang had apologized because he “had not taken into account humanitarian care and sent me to labor camp, which was not appropriate,” but he added that “inappropriate doesn’t mean illegal.”

The Labor Camp Committee admitted to offering Tang 100,000 yuan ($16,300 dollars) as an out-of-court settlement, which she refused. In an interview with the China Youth Daily, held a day before the hearing, Tang explained that people from the provincial court had visited her in May to try reaching a settlement. The presiding judge, two deputy judges, a chief judge, and a clerk promised to give her the compensation she sought, in addition to a 100,000 yuan life allowance and getting the Labor Camp Committee to apologize to her.

She refused the offer when the committee rescinded on a promise to let her see the wording of the apology statement. The presiding judge also told her that she was not allowed to tell other people about the settlement money.

“I said I didn’t want that. If they were giving the money to me out of true concern and good intentions to help me, then that ought to be commended, and should be known to everyone. I couldn’t accept their money amid darkness,” Tang told the Daily.

After the hearing, netizens reacted with sympathy toward Tang. “Ants Like Fantasy” from Zhejiang Province, said: “A great mother, but a pathetic legal system.”

A Fujian Province netizen, “A Xu,” said: “If ‘laojiao’ is abolished, then would it signal the Jiang [Zemin] faction being suppressed?” The re-education through labor system has been widely used under former Chinese Communist Party leader Jiang Zemin for his political campaigns, including the persecution of Falun Gong, a spiritual practice banned by Jiang in 1999.

Weizhuang, a Chinese writer, posted: “This is not only a tragedy for Tang Hui’s family but for every person in this country!”

With translation by Frank Tian. Research by Ariel Tian.