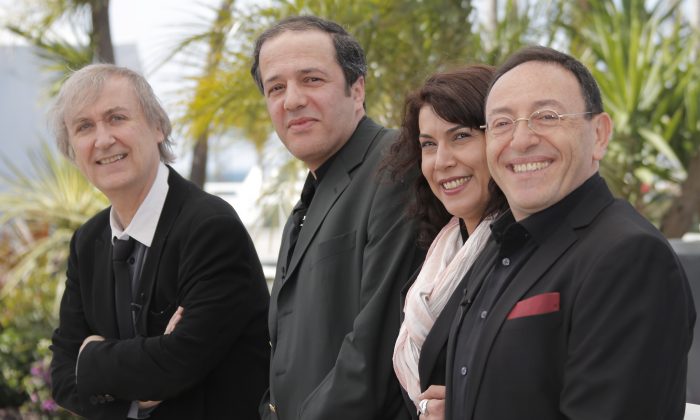 Cartoonists: Will Draw for Peace

French artist Plantu founded Cartooning for Peace, and made a film about brave cartoonists

Cartoonists are the foot soldiers of democracy, according to French editorial cartoonist Plantu. In Gaza, Arab artist Baha Boukhari, and Israeli artist Michel Kichka walk side by side, laughing. The Israeli dual citizen says he had to use his Belgian passport to visit his friend. They hope their friendship is a seed of peace. They and their fellow artists told their stories in a documentary by  Plantu, whose name is Jean Plantereux.

He said he dreamed of all the cartoonists being honored as heroes in a Hollywood or Cannes red carpet procession. “That mythical procession might, I hope, also protect these people, who don’t realize that every day they protect us by protecting democracy.”  Plantu started Cartooning for Peace in 2005, after people rioted over a Danish cartoon depicting Mohammed. The non-profit group is meant to promote tolerance.

In Venezuela, Rayma Suprani gets death threats. When her country’s new constitution forbade depictions of the tyrannical president Hugo Chavez, she drew a banana with a crown, instead. She said nothing changed in her country after Chavez died.

In Mexico, one of the most deadly countries in the world for journalists, cartoonist Angel Boligan mocks the drug cartels. In Tunisia, Willis from Tunis is a cartoon cat, and he speaks for Nadia Khiari. She writes that Willis’ enemies are “fundamentalists, politicians who hijacked the revolution, opponents of women’s rights, and those who cause bloodshed.”

In Beijing, Pi San creates an animated short in which a series of school children stand up to give a speech but get the hook and are dragged off stage for saying “sunflower seeds,” a reference to artist and regime critic Ai Weiwei. Pi wrote that his battle is “everyday injustice in China.”

In Atlanta, liberal cartoonist Mike Luckovich and conservative cartoonist Rick McKee spoke at  a screening of Plantu’s documentary, “Cartoonists—Foot Soldiers of Democracy.” Both men are members of Cartooning for Peace.  The Atlanta Press Club, the French consulate, and the Center for Civil and Human Rights presented the movie on April 16 in Atlanta  to honor 12 people murdered in a Jan. 7 attack on the offices of the satirical magazine Charlie Hebdo, in Paris.

Luckovich and McKee talk about what is good, what is funny, and what they agree on. They agree that they are both grateful to live in America, where freedom of expression is a treasured right. Where no matter how harshly they criticize our leaders, no one is going to knock on the door in the middle of the night, or make them disappear.

Luckovich said he does not try to provoke. He does try to procrastinate as much as possible, and then finally, when his deadline looms, to shine a light on hypocrisy and bad behavior. He said he cares about “how we treat each other.”

He won one of his Pulitzers for a serious piece. As the milestone of 2,000 American deaths in Iraq drew near, he began to write each name to form a giant “Why?” Some of the war dead were Hispanic people with three names, he said, but he was afraid they would not fit. So he chose to write just Juan Garcia instead of Juan Alvarez Garcia. His editor said no, you have to honor them by writing their names properly. So he went back and redid all the people who had three names. Luckovich held up his hand to show that it was blotted with Wite-Out. “I make a lot of mistakes.”

McKee said, “We owe it to freedom fighters of all types around the world to do what we can to spread those basic human rights.  The protections we enjoy under our Bill of Rights ought to be encapsulated in a single statement of humanity’s first rights.  And it should apply to everyone, in every nation.

“These cartoonists, and all those like them, need to know they are not alone.”

Both men said they respect the cartoonists around the world, like Khiari, Reyma, and Boligan, who keep telling their truths even though they face danger for it.

Mary Silver is an Epoch Times columnist based in Atlanta. She writes about health, hope, media, policy issues, and nature.  She wishes she were funnier.