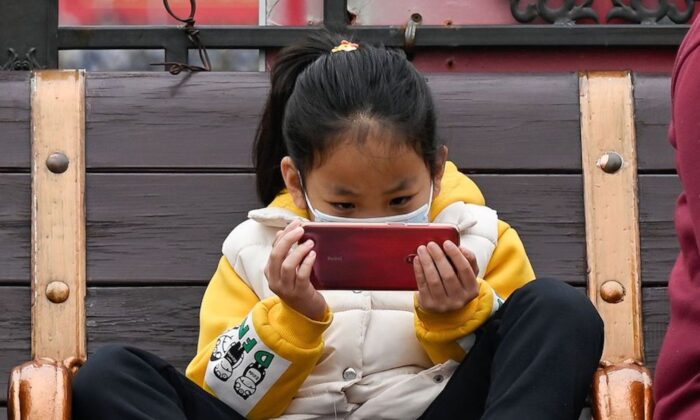 A girl watches a mobile phone as she rests on a bench in Beijing on March 4, 2021. (Wang Zhao/AFP via Getty Images)
China

Chinese authorities have stepped up efforts to rein in China’s entertainment industries with the national broadcast regulator urging online cartoon producers to avoid “unhealthy” cartoons with any violent, vulgar, or obscene content.

The National Radio and Television Administration (NRTA) said on Sept. 25, children and young people are the primary audiences for cartoons, and qualified agencies must broadcast only “healthy content”.

China’s regulators have been attempting to strengthen control over Chinese society in recent months by tightening oversight over a wide range of industries ranging from technology, education, culture, and entertainment.

They have accused the entertainment industry of “polluting” society and youth. Previous moves toward ramping up oversight focused on what state-run media outlets have depicted as “improper” idol worship, excessive wealth held by some, and dubious tax practices.

Earlier this month, the NRTA ordered internet platforms and television companies not to invite actors and guests “who have incorrect political positions, and who are divided in heart and practice from the [Communist] party and the country.”

A widely circulated commentary in state media characterized the drive as a “profound revolution” sweeping the country, and warned that anyone who resisted would face punishment.