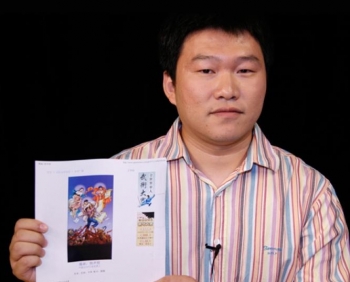 ‘Cartoon King’ Compelled to Leave China Before the Olympics

Once named the “King of Cartoons,” Guo Jingxiong was compelled to leave China just before the Beijing Olympics. Guo is the founder of the "Flag" cartoon and a Falun Gong practitioner. Guo feared that if he remained in China he might be arrested and persecuted.

The Chinese Communist Party (CCP) outlawed Falun Gong in 1999, and has since waged a brutal persecution against the group. The persecution has been intensified in the run-up to the Olympics.

Earlier this week, Guo spoke with The Epoch Times about the course of his artistic career and his life in New York.

“My father wanted me to learn Beijing opera, but after watching an opera I started to draw,” said Guo, whose father was an architect.

Guo’s Flag Cartoon Creation Alliance was founded at the end of 1999. Initially Guo and several others set up shop in a tiny office not more than ten square meters. After a few tough years, the studio became highly productive and began gaining recognition.

In 2002 alone, the studio published more than 70 volumes with an average monthly production of more than 1,200 drafts.

It was in 2002 that “Comical Liazhai” (Liazhai is a legendary book of ghost stories in China) won the gold medal of the Stame Cup in the National Animation Competition held by Chinese Central Television and Shanghai People’s Fine Art Publisher.

Guo was awarded the top prize in the Angouleme International Animation and Sequential Art Festival in France in 2006. He was the first Chinese to win this prize and he signed a contract with Europe’s largest animation publisher.

Back in college, Guo had waist-long hair and picked fights when drunk, holding nothing but disdain for the world. Guo says he is a completely different person now.

“At that time, the Chinese animation was affected by Japan and the western world. Individualism was prevalent, and artists’ thinking tended to go extremes,” said Guo. “I felt empty and lonely; I wanted to break though the pain and search for the meaning and value of life.”

He began studying western philosophy, along with Taoism, Lauze, Zhuangzi, Buddhism, and the Zen Sect.

“I started to look for the road to enlightenment. I was very fortunate to get to know Falun Gong and have become a simple and steadfast practitioner,” Guo said.

He started practicing Falun Gong in 1996, and says that over the years he has benefited from the practice both physically and spiritually.

“Falun Gong’s principle of truthfulness, compassion, and forbearance has guided my life, career, family and has made me feel blessed. When the Chinese regime started to suppress Falun Gong, I was puzzled. The fact that the Chinese regime pushed 100 million practitioners to the opposite side of a political struggle compelled me to appeal to the authorities. When I went to the city government to appeal, I was arrested for ‘disturbing the order of the society.’ I was bailed out by my work unit later.”

Guo decided to use his paint brush to counteract the CCP’s lies about Falun Gong. Using the alias “Sacred Fruit,” he published a series of cartoons.

Pointing to a painting entitled “Spread the Word – Support 3 Million Chinese Quitting the CCP” Guo said, “When the Nine Commentaries on the Chinese Communist Party was published in 2004, I was shocked after reading it. I clearly saw how the Chinese people were controlled and affected by such bad things,” Guo said.

In describing his painting Guo said, “Some people are being restrained by a thousand, ten thousand red devil’s hands, and are being dragged downward. Gods, Buddhas, and Falun Gong practitioners are working hard to help them break away. This is a most spectacular war between good and evil. It is the same as Michelangelo’s ‘Judgment at the End of Time,’ the difference is it is happening today in the land of China.”

‘Although the Land of Liang is Wondrous, it is not a Place for a Long Stay’ (famous saying by ancient Chinese philosopher Zhuang Ze)

When Guo traveled to Changchun City in November 2007, he was abducted a few days later by the Changchun National Security Bureau.

The tortures he was subjected to while in custody include forced standing and squatting for long hours, and sleep deprivation.

“They demanded I provide my contacts in the United States, and asked my family to lie that I was tied up by business and would return soon. At the time, both my family and my French publisher were all looking for me. In mid-December, someone from the Shanghai National Security Bureau interrogated me and asked me to explain what I did in Shanghai.”

Guo was bailed out that December. He was accused of creating a cartoon that damaged the image of the CCP, unlawful assembly at his home, funding Falun Gong practitioners (he paid the salary of his assistant) and “refusing to mend despite repeated admonition.”

He was told that he would be sentenced to 20 years in prison.

“During that time, a French cultural official had wired the French Embassy, urging them to follow up on my situation and to provide a guarantee for my visa. The embassy and I agreed to meet on January 15 to sign off on my visa; however, on January 14, the Shanghai Security Bureau demanded me to handover my passport but I refused. So I was once again detained for two weeks.”

According to Guo, the Security Bureau had been observing him for some time and revealed more than once that Guo would have been in prison long ago if not for the image of the Olympics and attention from the French government and his French publishing company.

Guo believed that he would certainly be arrested after the Olympics, so with the help of kind hearted people, he left his native land and came to the United States.

“When asking young college students in classes, many of them know nothing about Confucianism or of the five Chinese virtues of kindness, loyalty, etiquette, wisdom and trust,” Guo said.

He believes it is the broad and profound Chinese culture that nourishes the creation of fine arts. Guo believes the reason he was awarded the top prize at the Sequential Art Festival was because the judges saw the unique ideas reflected in his work, which is “most valuable.”

Guo says he’s now planning to “use his paintbrush diligently” to help those in the west understand real Chinese art.