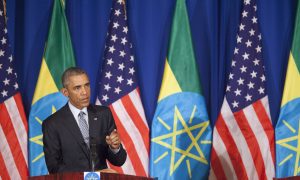 WASHINGTON—Defense Secretary Ash Carter said Wednesday that the U.S. armed forces stand ready to confront Iran, but told lawmakers that a successful implementation of the nuclear agreement with Tehran is preferable to a military strike.

Carter; Gen. Martin Dempsey, chairman of the Joint Chiefs of Staff; and three members of President Barack Obama’s Cabinet testified at a committee hearing as part of the White House’s aggressive campaign to convince Congress to back the Iranian nuclear deal, which calls on Iran to curb its nuclear program in exchange for billions of dollars in sanctions relief.

Carter said there is a possibility that the nuclear agreement will move forward, but will not be “successfully implemented.”

“That’s why we are under instructions from the president to preserve, and indeed we are improving—and I can’t get into that here—the military option,” Carter said. “Temporary as it is, it needs to be there because that’s our fall back.”

At the same time, Carter said that the successful implementation of the agreement would be better than taking military action because a strike would be temporary and likely would make Iran “irreconcilably resigned” to getting a nuclear weapon.

Dempsey added that implementation of the nuclear deal actually strengthens the military option because with enhanced inspections and access to sites in Iran, the United States would be able to obtain more knowledge about nuclear sites “that we might strike.”

Congress, which has begun a 60-day review of the deal, is expected to vote in September. If the Republican-controlled Congress passes a resolution of disapproval for the deal, Obama has said he will veto it. The administration is hoping to secure the backing of Democrats to sustain the veto.

On Tuesday, the White House won the backing of Democratic Rep. Sander Levin, a Jewish lawmaker from Michigan. His support was critical because Iran has threatened to destroy Israel.

But underscoring the hard-fought gains and losses, New York Rep. Grace Meng, a Democratic member of the House Foreign Affairs Committee, came out against the deal on Wednesday. She said the inspections protocols in the agreement are “flawed” and that she’s concerned that Iran’s nuclear infrastructure will remain intact.

“This leads me to believe Iran would simply resume its pursuit of a nuclear weapon at the conclusion of the deal in a decade’s time,” Meng said, adding that she also fears that the sanctions relief will give Iran more money to fund terrorism.

Nicholas Burns, former undersecretary of state for political affairs and ambassador to NATO, met with House Democrats at the invitation of Minority Leader Nancy Pelosi (D-Calif.) who is leading the effort to round up Democratic support for the deal. House Democrats also were scheduled to meet with Obama at the White House later in the day.

At a breakfast with reporters before the hearing, Treasury Secretary Jacob Lew, who also testified, said he believed the White House would gain enough support in Congress to sustain a veto if Congress votes to reject the Iran nuclear deal. There would be sufficient support—”enough for this to be sustained,” he said—if Congress rejects the agreement and Obama vetoes the resolution of disapproval.

Secretary of State John Kerry, the lead negotiator of the deal, tried to allay the concerns of Republican senators who complained that they are being asked to vote on the Iran nuclear deal without being privy to verification documents being separately negotiated by international nuclear inspectors.

“That is absolutely astounding,” said Sen. John McCain, the chairman of the Senate Armed Services Committee. Iran, he said, has a “clear record of cheating.”

Kerry said there is no side deal or secret agreements between Iran and the International Atomic Energy Agency (IAEA). There are, however, technical documents that are standard practice and not released publicly.

“We are aware of what the basics of it are,” Kerry told the committee members. “It is standard procedure for 189 counties that have an agreement with the IAEA. … We don’t get that. It is not shared with the world, but we do get briefed on it.”