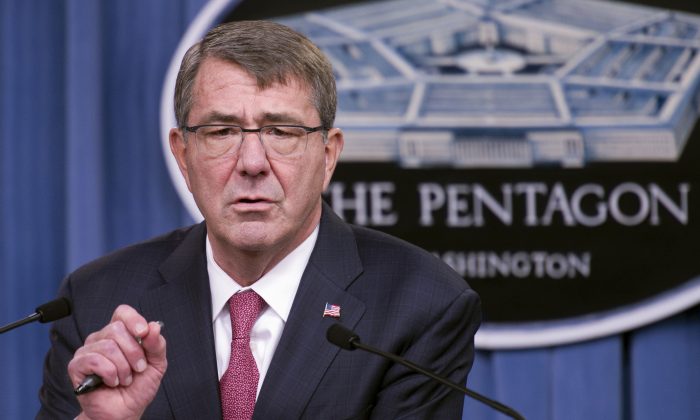 Defense Secretary Ash Carter gestures during a news conference at the Pentagon on Dec. 3, 2015, where he announced that he has ordered the military to open all combat jobs to women, and is giving the armed services until Jan. 1 to submit plans to make the historic change. (AP Photo/Cliff Owen)
Middle East

Carter in Iraq to Seek New Ways to Battle ISIS

BAGHDAD—Defense Secretary Ash Carter said Wednesday he came away from meetings with Iraqi leaders with no agreement on the use of Apache attack helicopters or additional military advisers in the battle to retake the key city of Ramadi from Islamic State (ISIS) militants.

But he said the U.S. was ready to provide such support if the Iraqis asked.

Speaking to reporters after meetings with Iraq Prime Minister Haider al-Abadi and others, Carter said that as military conditions change, the U.S. is prepared to increase its contributions to the fight.

The Obama administration has been talking for days about “accelerating” the fight against ISIS, but that could be complicated by Iraq’s reluctance to a greater U.S. presence in the country, including tools such as Apache helicopters and more troops.

“This is a very complex environment that we’re operating in and we have to be attentive to some of the political realities that surround us every single day,” said Lt. Gen. Sean MacFarland, top U.S. military commander for the Islamic State fight. “It’s kind of hard to inflict support on somebody. So we try to provide support.”

The two countries at times differ on how to wage the war, and any military support “has to be consistent with the way Iraqi security forces fight,” said MacFarland, speaking to reporters at the Baghdad International Airport.

Carter said MacFarland and Abadi believe there is no military need for the Apaches now. And those assets should only be used when they can make a critical, strategic contribution to the fight. But, he said, that doesn’t mean they won’t make a difference “sometime in the future.”

A senior U.S. official said the U.S. has been making preparations and will be ready at any moment to dispatch the Apaches when requested. The official was not authorized to discuss the matter publicly, so spoke on condition of anonymity.

At the start of his meeting with Abadi, Carter offered a short statement on the importance of Iraq’s independence

“Everything we do … here is subject to the approval of the sovereign Iraqi government,” Carter said. “And I also wanted to emphasize to you, the respect for sovereignty and for Iraq’s territorial sovereignty is a principle that the United States strongly supports in every context.”

“I think we are on the verge of breaking the back of Daesh,” he said, using the Arabic acronym for the Islamic State.

The Iraqi reluctance for U.S. assistance also could delay any move to embed U.S. military advisers with Iraqi brigade headquarters. The small advisory teams wouldn’t be on the front lines, but would provide better planning advice and coordination for the Iraqi units, said Army Col. Steve Warren, a U.S. military spokesman who noted that many Iraqis “don’t agree with the American presence in this country.”

Carter also talked with MacFarland and the Iraqi leaders about the new U.S. plan to deploy a special commando force to Iraq. It will be designed to better capitalize on intelligence in order to target, capture and kill Islamic State leaders. Called an “expeditionary targeting force,” the special operations troops would be used to increase the pressure on the insurgents.

Details of the plan have not been disclosed, and U.S. officials haven’t said when they may deploy to Iraq.

The recent focus has been the battle in Ramadi, the capital of Anbar province, which ISIS militants took in May.

Iraqi troops, backed by U.S.-led coalition airstrikes, pushed into Ramadi earlier this week, have surrounded the city and have been preparing to try to take the city back.

Warren said that Iraqi forces lost ground for a short time on Tuesday, but were able to eventually regain the territory and beat back the insurgents, with help from coalition airstrikes.

Carter has been saying he wants to identify new ways that other coalition members can contribute to the campaign. One goal is to get allies to take on some of the missions being done by some of the approximately 3,500 U.S. troops in Iraq, so that those forces can take on more specialized roles.

Carter’s trip had been planned for some time, but on Monday during a Pentagon visit, President Barack Obama vowed to accelerate the campaign against ISIS, lending more urgency to the visit.