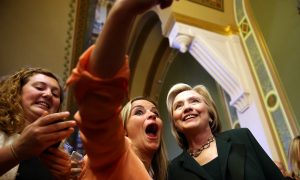 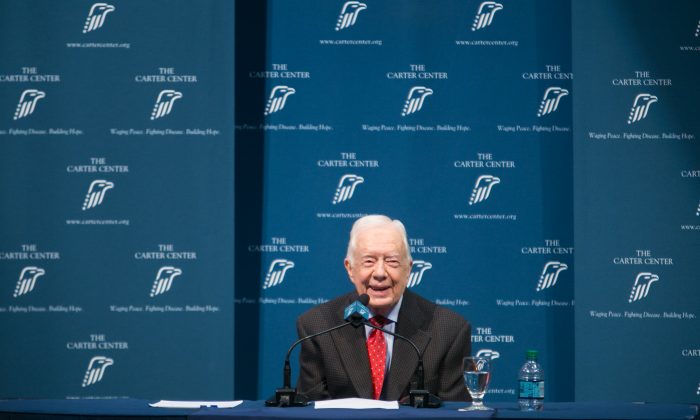 With Humor and Honesty, Carter Talks About His Cancer

ATLANTA—With a broad smile and an upbeat attitude, former President Jimmy Carter told the world Thursday that he has cancer in his brain, and feels “perfectly at ease with whatever comes.”

Carter said doctors had removed melanoma from his liver, but found four small tumors in his brain. Later Thursday, he had the first of four targeted radiation treatments. He also will receive more injections of a newly approved drug to help his immune system seek out and destroy the cancer cells wherever else they may appear.

Wearing blue jeans and a blazer, Carter spoke with good humor and unsparing honesty, revealing that he had kept suspicions of cancer from his wife, Rosalynn, for weeks until the diagnosis was confirmed in June.

“Now I feel it’s in the hands of God, whom I worship, and I’ll be prepared for anything that comes,” he said.

Carter’s team of doctors at Emory Health Care includes Dr. Walter Curran Jr., who runs Emory’s Winship Cancer Institute. Treatments for melanoma have improved tremendously recently, and Carter’s prospects are good even at the age of 90, Curran said. But he cautioned against the idea that Carter can be “cured.”

“We’re not looking for a cure in patients who have a disease like melanoma that has spread,” Curran said. “The goal is control and to have a good quality of life.”

Carter said he thought the cancer was only in his liver and was removed with surgery on Aug. 3, but an MRI exam that same afternoon showed the spots on his brain. Carter said he went home that night thinking he had only a few weeks to live, but found himself feeling “surprisingly at ease.”

The former president didn’t discuss his long-term prognosis, but said he will cut back dramatically on his humanitarian work while following the orders of a team that includes the world’s best “cancer-treaters.”

His treatment regimen will include three more sessions three weeks apart. The tumors in his brain will be blasted by concentrated beams of radiation and he will get more injections of pembrolizumab, which was approved by the FDA for melanoma patients earlier this year.

“This is not a eulogy in any way,” said grandson Jason Carter, who is taking over as chairman of the board of trustees at the Carter Center, which promotes peace, democracy and health care improvements around the world.

Still, his grandfather’s responses to reporters often expanded into reflections on his life, faith and family.

“I’ve had a wonderful life,” Carter said. “I’ve had thousands of friends, I’ve had an exciting, adventurous and gratifying existence. So I was surprisingly at ease, much more so than my wife was.”

Rarely letting his grin fade, Carter said he has not felt any serious pain or weakness, and slept for 14 hours the previous night after receiving his first injection.

“I think it’s about the best sleep I’ve had in many years,” he said.

Carter’s next few months are in flux. He said had been committed “up until this morning” to flying to Nepal in November to build more houses on a Habitat for Humanity trip. It would have been the 33rd such mission for the former president and his wife, but doing it this year would mean postponing the last radiation treatment.

“If I don’t go, the rest of my family will probably go to take my place,” he said with a hint of resignation.

Carter described a more limited routine. He plans to host his extended family at Rosalynn’s 88th birthday celebration in their hometown of Plains on Saturday, and will keep teaching Sunday School at their small church. He said he looks forward to his 91st birthday on Oct. 1 and, as much as he’s able, will continue lecturing at Emory, raising money for his center’s $600 million foundation, and meeting with experts on guinea worm and other diseases the center is working to eradicate.

Said Jason Carter: “I don’t think anybody who knows him was surprised to see him sitting here saying, ‘I’m going to be completely honest and transparent about what’s going on with me and I’m going to face it,’ with this deep and abiding faith and courage and analytical brain and all those other aspects of him that have led him to lead this incredibly giant human life.”

Carter opened by thanking his wife of 69 years, who quietly in the front row, never reaching for the tissues placed near her chair.

Marrying her was the best thing he’s done in his life, Carter said, and his eyes often returned to her during the 45-minute press conference. He said he appreciated all the well-wishes, including calls from current and former presidents. “First time they’ve called me in a long time,” he added playfully.

Carter said his cancer story began in May, when he caught a bad cold while monitoring an election in Guyana. Doctors found a spot on his liver during a follow-up exam and recommended its removal. But he wanted to complete a book tour before the surgery, and delayed telling others until the diagnosis was certain.

More tests since then have not determined where his melanoma began or how it spread, but Curran said that won’t hinder treatment. Carter said more testing could find it elsewhere in his body.

When Carter learned he has cancer, “he was worried that he wasn’t going to get to finish the book he was reading,” his grandson said. But now, “having spoken with the doctors, he understands that there’s a period of time and he’s going to be able to go catch some fish, and hopefully catch more of his grandkids’ baseball games.”

Carter, the nation’s 39th president, served in submarines in the Navy and spent years as a peanut farmer before running for office, becoming a state senator and Georgia governor. His “plainspoken” nature helped Democrats retake the White House in 1976 in the wake of President Richard Nixon’s impeachment.

On Thursday, he said he remains proud of what he accomplished as president, but is more gratified by his humanitarian work since then, which earned him a Nobel Peace Prize in 2002.

Asked to name his biggest regret, he brought up the failed mission to rescue American hostages in Iran, a fiasco that many believe ended any hopes for another four years in the White House.

Then again, “It could have been both,” he added with a wink, prompting another round of laughs.