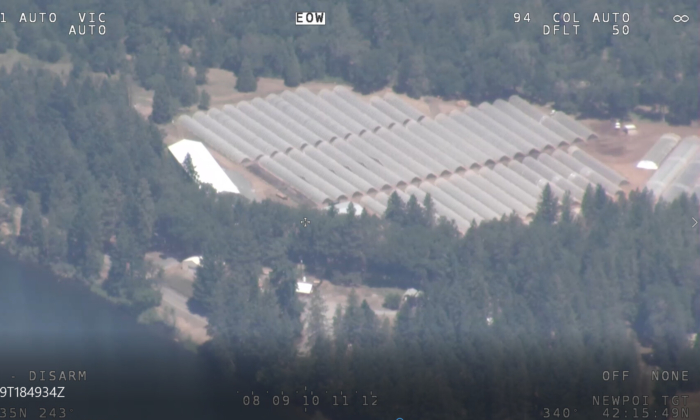 Scottie Barnes
Freelance reporter
Scottie Barnes writes breaking news and investigative pieces for The Epoch Times from the Pacific Northwest. She has a background in researching the implications of public policy and emerging technologies on areas ranging from homeland security and national defense to forestry and urban planning.
View profile
biggersmaller
Print

Seven years after Oregon legalized recreational marijuana, the market for cannabis is booming. But rather than propagate a legal agricultural sector that grows the state’s economy as intended, the industry has taken a dark turn in Southern Oregon.

Oregon voters were told that legalization would put an end to the black market for marijuana. Taxing the legal product would help to fund schools and police—both of which have suffered tremendous loss of revenue in the state since federal policies led to a decline in timber revenues, proponents of legalization said.

At first, the expectations played out as promised.

The problems began when criminal enterprises learned that they could use a legal hemp farm operation as cover for an illegal marijuana grow, and that they could overwhelm law enforcement, which has been defunded for decades in small rural towns.

Today, the Oregon Health Authority reports that nearly half of the registered hemp farms inspected in Oregon are illegally growing marijuana. And another 25 percent of registered hemp farms won’t allow state inspectors in. Growers can simply thumb their noses at law enforcement with no consequence.

Once growers realized that, the rush was on.

“Drug traffickers flocked here from every state in the nation and nearly a dozen countries,” including China, Russia, Bulgaria, and Argentina, Josephine County Sheriff Dave Daniel told The Epoch Times. “One of the best defensive backs in the NFL bought a 40-acre property here and immediately put an illegal marijuana grow on it.”

A growing operation can generate nearly $1 billion each year, and the sheriff estimates there are hundreds of illegal grows in his county alone.

“That’s why the cartels are here,” Daniel said. “Some people will do anything for that kind of money. Murder. Rape. Traffic human beings.”

“We estimate that about 10,000 migrant workers have been brought to the county by bus and truck,” Morgan told The Epoch Times. “One day, they are in Southern California holding up a sign looking for work and the next day, they’re dropped off in Oregon without identification or money, and they don’t speak English.”

“We served one search warrant and found nearly 300 migrant workers,” he said. Locked in a barn, “they were fed twice a day and had no running water or other facilities.”

“These people are narco-slaves,” Daniel said. “They’re afraid that the cartels will kill them or their families back home, so they don’t talk.”

When a grow is done, they are often abandoned.

Though slavery is the most shocking issue, the effects on the environment and livability are also profound.

One constituent told Morgan that her well water level had been at 35 feet for the past 25 years. After a neighbor started a grow operation, her water dropped to 75 feet.

“They also use pesticide foggers to kill bugs, and it contaminates the aquifer,” Morgan said. “Legal growers, neighbors, and other farms are all affected,” and workers are exposed to high levels of toxins.

“A property goes on the market and it sells immediately, sometimes at twice the asking price in cash,” Morgan said. “Residents can’t afford to buy.”

Many live in fear.

“People who were living on a quiet rural property suddenly find themselves surrounded on all sides by new landowners conducting industrial operations 24 hours a day seven days a week,” she said. “They drive trucks in and out and run generators 24 hours a day. They shoot guns at all hours. They blare music all night.”

After complaining, one resident found a carload of Guatemalans parked at the end of his driveway to send a message, said Morgan.

“Those who have spoken up before now feel like they need to watch their backs,” she said.

Though his county is now partnering with the FBI, DHS, and other law enforcement organizations, Sheriff Daniel said his staff is overwhelmed with what he calls a national security issue.

“We need the IRS, DEA, and DHS to get involved in a big way, and we need cases prosecuted,” he said. “We need a full-court press.”

“The Justice Department needs to be doing more about this issue at all levels,” Bentz said during the hearing. “Oregon, and possibly other states, are caught up in the illegal growing and production of marijuana and cannabis on an industrial scale. This industry is based in large part on the miserable suffering of thousands, if not tens of thousands, of people coming across the border illegally, and then being pressed into indentured servitude by cartels.”

“We’re not even treading water anymore,” he said. “We’re going under.”

Scottie Barnes
Freelance reporter
Scottie Barnes writes breaking news and investigative pieces for The Epoch Times from the Pacific Northwest. She has a background in researching the implications of public policy and emerging technologies on areas ranging from homeland security and national defense to forestry and urban planning.