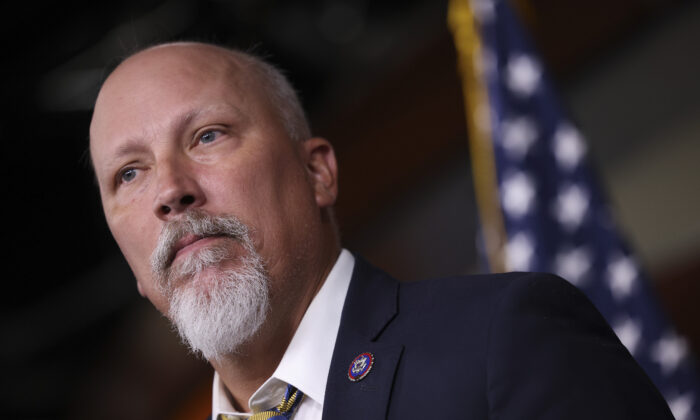 Cartels Have Operational Control of US Border, Are ‘Terrorizing’ the US, Rep. Chip Roy Says

Border Patrol agents apprehended more than 1.3 million illegal immigrants crossing into Texas from Mexico in 2021, while hundreds of thousands more weren’t captured. Seizures of the deadly synthetic opioid fentanyl have sharply increased, as have overdose deaths in the United States.

“China is moving it through Mexico, cartels are making money, China is getting empowered, America’s getting hammered—all because this administration refuses to do its job of securing the border.”

The chemicals to make fentanyl are produced in China and shipped to Mexico, where counterfeit pills are manufactured, heroin is spiked, and other products are laced before being sent across the southern border.

The cartels, which fight over the lucrative territory that abuts the United States, have expanded their reach, profits, and power through a massive increase in human smuggling and trafficking over the past year.

They often send large groups through in one area of the border to tie up Border Patrol resources, which leaves nearby areas unpatrolled and open for illicit transport, said Rodney Scott, former U.S. Border Patrol chief.

“They simply overwhelm agents with those massive numbers, and that creates other areas where there’s no law enforcement at all,” Scott told “Capitol Report” on Dec. 16.

“That’s where they’re bringing the narcotics, the criminal aliens, the people that want to avoid arrest for whatever reason, and they’re just pouring across at will. This is a crisis, and it is real.”

“These are human beings. They are put into the labor or sex trafficking trade and they’re basically held as slaves to enrich the worst elements of our society—cartels, but also just illegal illicit organizations that are perfectly happy to use the cartel network to get the people that they’re going to abuse. It’s absolutely horrific,” Roy said.

“One boy thought he was paying $4,000 to go pick grapes in California. Instead, he was going to be held for ransom in a stash house in Houston.”

“The driver of the car was an American citizen employee of one of those cartels, moving those eight people—two of whom were bound in the trunk—heading to a stash house in Houston,” Roy said.

“How is the most powerful nation in the history of the world allowing our borders to be operationally controlled by cartels, while Democrats pat themselves on the back for compassion, using asylum as an excuse for wide-open borders that do nothing good for the American people?”

Roy has introduced a bill that seeks to designate two cartels as terrorist organizations in the past two congressional legislative sessions.

The bill has the support of 45 co-sponsors, all Republicans.

But he’s not confident it will be approved during the Biden administration.

“They don’t give a rat’s rear end about securing the border or trying to go after cartels,” Roy said.

But the bill also faces opposition from some Republicans.

“You have some Republicans who hand-wring and go, ‘Well, you can’t call them cartels, because you elevate them to something that’s the same as the Taliban, or Al-Qaeda, or ISIS,” Roy said.

“They hang people, they bury people alive. They kill people and send videos to their families so that they can terrorize people.”

Roy said the United States needs to go after the cartels and reclaim operational control of the southern border.