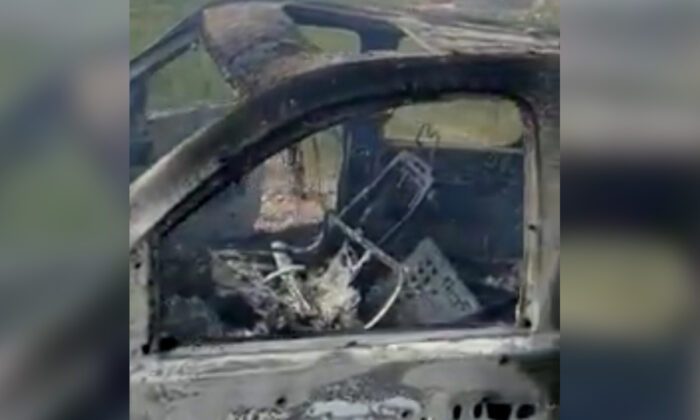 The burnt wreckage of a vehicle transporting a family living near the border with the United States is seen, after the family was caught in a crossfire between unknown gunmen from rival cartels, in Bavispe, Sonora, Mexico on Nov. 4, 2019. (Kenneth Miller/Lafe Langford Jr. via Reuters)
Americas

Those dead included at least three women and six children, family members told The New York Times. The victims were all members of the LeBaron family, American citizens who have lived in a Mormon community near the United States-Mexico border for decades.

The family was traveling in three separate vehicles on Nov. 4 when they were attacked, family members said. Some were trapped in a burning car while one child was shot dead while trying to flee the scene.

“When you know there are babies tied in a car seat that are burning because of some twisted evil that’s in this world, it’s just hard to cope with that,” Kenny LeBaron, a cousin of the women who were driving the vehicles, told the paper. “They intentionally murdered those people. We don’t know what their motives were.”

Seven other children survived the attack, he said.

Lafe Langford Jr., a relative of some of the victims, posted a video showing a burned-out, bullet-ridden car.

He said that the mothers and “many of their precious innocent children have been slaughtered and gone to their rest.”

One of the older boys who was with the group managed to escape with six of his siblings and run home “after leaving his wounded, bleeding, and bullet-ridden brothers and sisters hiding behind trees from the ongoing shootout between the cartels,” Langford wrote in a Facebook post late Monday.

He added: “Teenagers and adults have been scrambling into the mountains to find our loved ones… risking their very own lives… while help is nowhere to be found… GOD HELP US IN JESUS NAME WE PRAY.”

A spokesman for the U.S. State Department told KSL-TV, a Utah broadcaster, that the department was aware of the reported killings.

Taylor Langford, another relative, who lives in Utah, said that the attack represented a new level.

“It’s a whole new level,” Langford told KSL. “The cartel is completely out of control and the government isn’t doing anything about it.”

The victims were mothers Maria Rhonita Miller, 43-year-old Dawna Ray Langford, and 31-year-old Christina Marie Langford and some of their children: four of Miller’s children, two of Langford’s children, an 11-year-old and a 3-year-old, Lafe Langford Jr. told the Salt Lake Tribune.

Julian LeBaron, who is related to the victims, told Reuters that those who were injured but survived were being transported to Phoenix, Arizona, for treatment. He said the children who died were four boys and two girls.

The family members are part of La Mora—a decades-old settlement in Sonora state founded as part of an offshoot of The Church of Jesus Christ of Latter-day Saints.

Mexico’s federal Department of Security and Citizens’ Protection said security forces were reinforced with the National Guard, army, and state police troops in the area following “the reports about disappearance and aggression against several people.” The troops were searching for the missing community members.

Claudia Pavlovich Arellano, the Governor of Sonora, issued a statement saying: “As a mother, I feel courage, repudiation and deep pain for what cowards did in the mountains between Sonora and Chihuahua. I don’t know what kind of monsters dare to hurt women and children. As Governor, I will do everything to make sure this does not go unpunished and those responsible pay.”

Another relative, who asked not to be named for fear of reprisals, said the convoy of three vehicles had set out Monday from La Mora, about 70 miles south of Douglas, Arizona, but was attacked by cartel gunmen in a possible case of mistaken identity. Many of the church’s members were born in Mexico and thus have dual citizenship.

It would not be the first time that members of the break-away church had been attacked in northern Mexico, where their forebears settled—often in Chihuahua state—decades ago.

In 2009, Benjamin LeBaron, an anti-crime activist who was related to those killed in Monday’s attack, was murdered in 2009 in neighboring Chihuahua state.