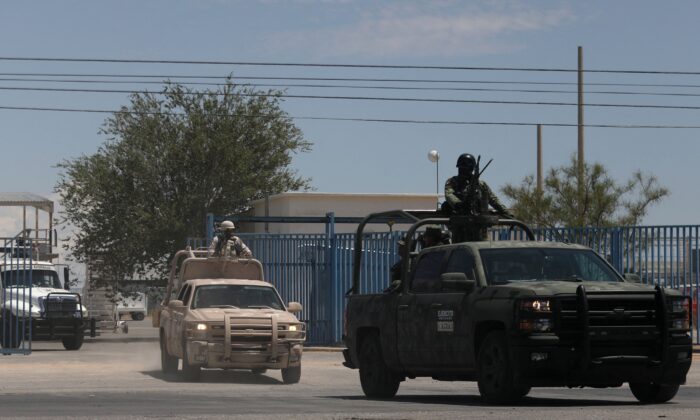 Members of the National Guard and the Mexican Army leave the airport after landing in Ciudad Juárez, Chihuahua, Mexico, on Aug. 12, 2022, after a rash of violence in the city. (Herika Martinez/AFP via Getty Images)
Americas

The Jalisco New Generation Cartel threatened widespread violence over the weekend in Baja California, prompting warnings from the U.S. Embassy in Mexico.

A message reportedly sent out from the cartel threatened violence in order to urge the government to free captured members.

“Be warned. As of Friday at 10 p.m. through Sunday at 3 a.m. we’re going to create mayhem so the [expletive] government frees our people. We’re the Jalisco New Generation Cartel, we don’t want to hurt good people but it’s best they don’t go outside, we’re going to attack anyone we see on the streets on these days,” the cartel said, according to KSWB-TV and other media outlets.

The U.S. Department of State issued warnings to Americans in Baja California, including Tijuana, Mexico. It stated that U.S. government employees should shelter in place starting on Aug. 12. The shelter-in-place order ended on the afternoon of Aug. 14, according to the U.S. Embassy website.

“The U.S. Consulate General Tijuana is aware of reports of multiple vehicle fires, roadblocks, and heavy police activity in Tijuana, Mexicali, Rosarito, Ensenada, and Tecate. U.S. government employees have been instructed to shelter in place until further notice,” the consulate in Tijuana wrote on Twitter on Aug. 12.

A second message from the U.S. consulate stated that U.S. citizens should “avoid the area,” “seek secure shelter, if in the area,” “monitor local media for updates,” “be aware of your surroundings,” and “notify friends and family of your safety.”

Tijuana Mayor Montserrat Caballero said in a video and an accompanying press conference over the weekend that criminal gangs won’t force Tijuana, which is located near San Diego, to shut down. About 3,000 federal troops in Baja California would assist police, she said

“We are not going to allow a single Tijuana citizen to pay the consequences of those who didn’t pay their bills,” she said on Aug. 13, according to Fox News. “We ask that you make the people who owe you pay up, not the families and citizens who work.”

“Business leaders are very concerned about the climate of insecurity that exists in some areas of our country and we need to have the guarantee of the full application of the rule of law,” Mexico’s Chamber of Commerce stated.

The plea followed a night of violence in the central states of Guanajuato and Jalisco on Aug. 9, where military personnel clashed with cartel members, prompting the U.S. embassy to issue a travel warning in the area.