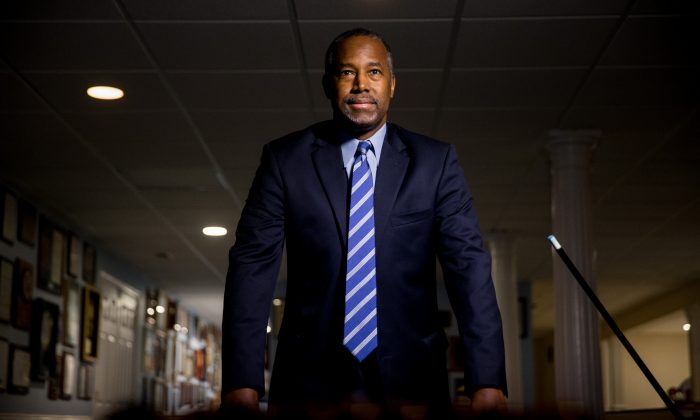 WASHINGTON—Long before Ben Carson became one of the leading Republican presidential candidates, he built his own brand by traveling around the country raising money for a charity that bears his name, awarding college scholarships, promoting his books and earning hefty payments to speak to large groups.

Carson’s name and face adorn the walls of dozens of schools in the United States and a medical school in Nigeria. Mayors have handed him the keys to their cities. His charity, founded in 1994, created a national day in his honor each year, celebrated by the children who read in elementary school reading rooms named after him.

Carson’s political campaign has excelled at fundraising, bringing in almost $32 million through the end of September—more than any other 2016 Republican candidate. Speaking fees over a nearly two-year period raked in $4.3 million. And his nonprofit continues to raise money.

All of this is part of a well-honed enterprise that promotes Ben Carson as presidential candidate, political commentator, paid speaker, author, neurosurgeon, and champion of children, reading and God.

It’s hard to see where one Carson stops and another begins.

“I think as people get to know me they’ll be able to see exactly who I am,” Carson said in an interview in late October. “I don’t worry about that.”

Carson’s campaign imposed boundaries to separate his politicking from a two-week publicity tour promoting his latest book. Since he declared his candidacy, more than 52,000 copies of versions of his signature book, “Gifted Hands,” have sold, according to industry statistics from Nielsen BookScan.

Carson has continued to give paid speeches since he declared his bid for the presidency, and in some cases, he’s had political events around the same time.

Most political candidates focus only on their campaigns to avoid any potential violation, said Lawrence Noble of the Campaign Finance Center, a Washington non-profit group that promotes transparency in politics. For instance, if a candidate is getting paid to speak at an event, he or she has to make sure not to mix that with campaigning, he said. Continuing with paid speeches, book promotion tours, and charity events and keeping those separate from the campaign is a challenge, Noble said.

Carson has continued to give paid speeches since he declared his bid for the presidency, and in some cases, he’s had political events around the same time.

Since May when he declared his candidacy, he’s been paid to speak at seven events, bringing in between $210,000 and $500,000, according to a financial disclosure he was required by law to file in June. Carson was not required to disclose the exact fee because the speeches hadn’t taken place at the time he filed.

What Carson says at these paid speaking events is critical to evaluating whether Carson violated any campaign laws, Noble said. But most of the paid-speaking events are not open to the public.

On Sept. 22, in Dayton, Ohio, Carson was paid between $15,001-$50,000 to speak at an anti-abortion group, according to his public financial disclosure. The executive director of the nonprofit that hosted Carson said the group also paid for his travel. Paul Coudron said his organization booked Carson for its annual event a year ago.

“He did have two other events in the area, as a matter of fact, that same day, much to our surprise, actually, when we found that out relatively close to the day of the event,” Coudron said. He would not disclose how much the group paid for Carson’s travel costs.

The sponsor of the speaking event cannot subsidize campaign travel, Noble said. That could jeopardize the organization’s tax-exempt status.

Carson’s spokesman, Doug Watts, said that Carson’s room and transportation to and from the anti-abortion group’s event were covered by the Washington Speakers Bureau, which booked the paid speech. And Carson’s travel to and from Dayton was paid for by the campaign.

“We segregate as much as feasible,” Watts said.

Some organizations that have paid Carson to speak have also contributed to his charity, the Carson Scholars Fund. The charity doles out $1,000 college scholarships for 4th through 12th graders. It also funds “Ben Carson reading rooms” around the country, spaces where children can read for pleasure, typically with a poster of Carson and quotes from him on the walls.

The charity did not respond to questions about whether it purchased any of Carson’s books for fundraisers.