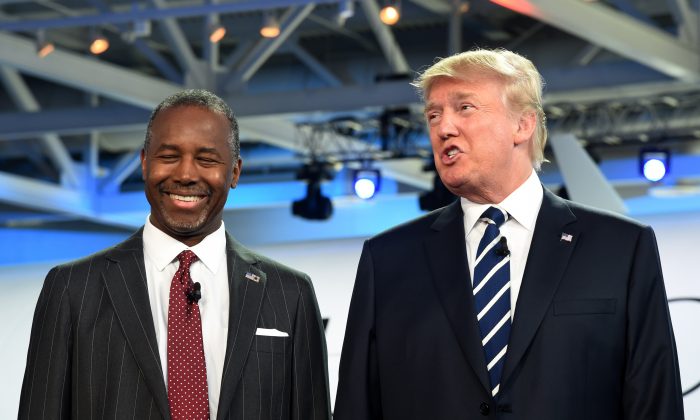 WASHINGTON — The top two GOP presidential hopefuls, Donald Trump and Ben Carson, have requested protection from the U.S. Secret Service, a spokeswoman for the Department of Homeland Security said Monday.

The taxpayer-funded agency said the two campaigns have submitted requests, which kick off an evaluation period during which Homeland Security Secretary Jeh Johnson consults with five senior members of Congress and issues his decision, DHS spokeswoman Marsha Catron said in an emailed statement. A Democratic leadership aide, who as not authorized to speak publicly, said on condition of anonymity that the agency has not yet consulted with the lawmakers.

Carson held a book signing Monday in Austin, Texas, where he told reporters, “I don’t feel the need for it, quite frankly, but the Secret Service thinks that I need it, so it is what it is.”

The requests come months before the Republicans and the Democrats name their presidential nominees, and more than a year before Election Day. But both candidates have made controversial remarks about ethnic and religious minorities, and are drawing large and unpredictable crowds. Secret Service protection, if it comes, can save a candidate big money in security expenses and pay off politically by conveying legitimacy to a campaign.

According to disclosure forms filed with federal authorities last week, Trump spent at least $55,000 on security expenses for the three-month period ending Sept. 30. That includes travel and lodging costs for the bodyguards who move from event to event with the billionaire real estate developer. Trump is always surrounded by several private security guards and often local police officers.

Carson, in contrast, listed only $2,097.50 for personnel service and equipment under security expenses. But while signing books at an Austin Costco, two employees of the wholesaler who were helping with crowd control said they saw more than one security agent with Carson.

Neither local police nor congressional officials would say Monday whether Secret Service protection had been granted to the candidates.

“I recognize that someone like me, who is very truthful and who really doesn’t subscribe to all the traditional power structures, is probably going to be a target and I do understand that,” Carson said. “I also think that there’s a God. But, you know, you have to be logical, so I will deal with it.”

Carson campaign spokesman Doug Watts, meanwhile, said in an email, “We are not discussing security matters and we are not confirming making a request.” Representatives for Trump’s campaign did not respond to a request for comment.

It’s not unusual for candidates to ask for and receive protection from the Secret Service before the party’s presidential nominee is chosen. President Barack Obama received protection in May 2007 — 18 months before he was elected the nation’s first black president.

Both Trump and Carson have made controversial remarks about ethnic and religious minorities. Trump called Mexican immigrants rapists and murderers, while Carson has said he would not be comfortable with a Muslim president.

“I want to put them on notice because they should have a liability,” Trump told The Hill newspaper last week. “Personally, I think if Obama were doing as well as me, he would’ve had Secret Service (earlier). I have by far the biggest crowds.”