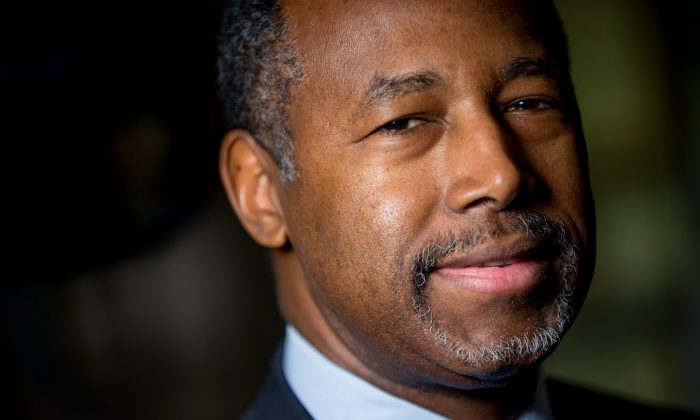 Republican presidential candidate Dr. Ben Carson poses for a photograph before speaking with The Associated Press in his home in Upperco, Md., on Dec. 23, 2015. (AP Photo/Andrew Harnik)
Politics

UPPERCO, Md.—Republican presidential candidate Ben Carson said Wednesday morning he is moving toward a major shake-up of his struggling campaign, with less than six weeks to go until early voting begins to select party nominees.

Yet by Wednesday evening, he tried to steer away from that message, announcing that all is well in the Carson camp.

In a Wednesday morning interview with the Associated Press at his Maryland home—conducted without the knowledge of his own campaign manager—Carson said “personnel changes” could be coming, suggesting he would consider sidelining his top aides.

Carson’s longtime business adviser Armstrong Williams put it more bluntly: “Dr. Carson is back in charge, and I’m so happy to see that,” he said. Williams himself has publicly feuded with the paid political professionals brought in to run Carson’s campaign.

Following an afternoon meeting with some of his paid advisers Wednesday—a group that did not include Williams—Carson said in a statement that while he has 100 percent confidence in his campaign team, “we are refining some operational practices and streamlining some staff assignments to more aptly match the tasks ahead.”

The statement added that his senior team “remains in place with my full confidence, and they will continue to execute our campaign plan.”

Campaign manager Barry Bennett was not aware of Carson’s statements about potential changes until told by The Associated Press. He later texted: “No staff shake-up.”

The apparent rift between Carson, Williams and the paid campaign staff comes after his weeks-long slide in polls. The political newcomer—a celebrated pediatric neurosurgeon—briefly surged to the top of the GOP field in October, riding public appeal for more anti-establishment candidates, while making headway with Christian and conservative voters.

With the spotlight came scrutiny. Carson publicly lashed out at media reports questioning details of his celebrated autobiography.

Terrorist attacks in Paris and California shifted the focus of the race to foreign policy and national security, sometimes highlighting Carson’s lack of experience. Another challenge: He is soft-spoken in a race dominated by media-savvy, tough-talking figures including real estate mogul Donald Trump and Texas Sen. Ted Cruz.

“I certainly don’t expect to get through a campaign without some scratches and bruises,” Carson said. “That’s the nature of the beast.”

Then came the internal disarray.

Carson had raised $31 million by the end of September, more than any other Republican in the race, but he’s outpaced the competition on spending—mostly on fundraising costs rather than critical political infrastructure.

“I recognize that nothing is perfect,” Carson said. “And, yes, we’ve had enormous fundraising, but that requires that you be efficient in the way you utilize the funds. And, yes, we are looking at all those things.”

Carson acknowledged that some of his difficulties were of his making.

He said he must prove to voters that he is up to the challenge to be commander-in-chief.

“I think I have to directly address the issue,” he said, sitting in his basement game room, where the walls around him are covered in decades’ worth of accolades.

People think that “because you are soft-spoken and nice, you can’t possibly be tough, you can’t have the strength to deal with the incredible security problems we now face,” Carson said. That “is not true, but I’m now talking about it.”

In recent campaign stops, Carson has started offering more specifics on foreign policy, such as detailing how U.S-led coalition forces can work to retake the Syrian city of Raqqa, the de-facto capital of the Islamic State group’s so-called caliphate.

Carson said he plans to put emphasis on his strategy for Libya when he returns to the trail after Christmas. He maintains that too many U.S. leaders, including some of his GOP rivals, have zeroed in on the Islamic State group’s activities in Iraq and Syria, while failing to acknowledge that they pose a threat beyond those borders.

“They have a global strategy,” Carson said of the militant group, arguing that the U.S. must counter it.

Carson said the rough-and-tumble nature of the 2016 race has not outweighed his favorite campaign moments. “The patients,” he said with a smile, explaining that he often meets former patients on the campaign trail who are eager to share their stories with him.

He recalled meeting one patient to whom he’d given a hemispherectomy—removing half the brain—as an infant. “He had graduated from college number one in his class—with half a brain,” Carson said. “These are incredible stories.”

Carson said a retooled campaign will not involve personal attacks on his Republican rivals, though he said he will look to place greater emphasis on their differences in policy and experience. He repeated his pledge to support the eventual GOP nominee if he does not win the nomination, explaining he’d respect the voters’ wishes.

Besides, Carson said, he likes his opponents—including bombastic Trump.

“There isn’t anybody there who is unpleasant,” Carson said. As an example, he noted that Trump had complimented him during the most recent GOP debate in Las Vegas.

“Then he came up to me during the break,” Carson recalled, “and said, ‘I really meant it.'”