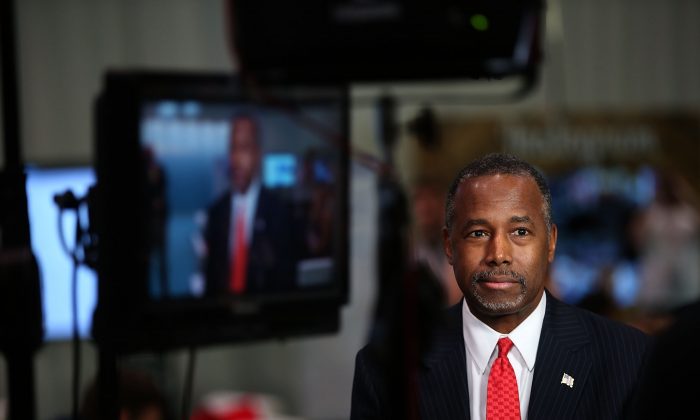 Since then, however, the retired neurosurgeon has fumbled on foreign policy, lashed out publicly at scrutiny of his life story and has had to referee a tug-of-war among his closest advisers—all while watching his rivals capitalize on his troubles.

But six weeks before voting begins, Carson’s campaign insists that he is still poised to win in first-to-vote Iowa, where Carson plans to concentrate his campaign through to the Feb. 1 caucus.

The blitz comes amid lingering questions about his overall readiness for the job. His aides acknowledge that national front-runner Donald Trump and Texas Sen. Ted Cruz, who some polls show as the new leader in Iowa, have commandeered the spotlight in a Republican race, the focus of which has shifted to national security following mass attacks at home and abroad.

The candidate himself remains unwavering.

“It doesn’t matter; all I have to do is tell the truth,” the Carson said Friday—day two of a weeklong swing through Iowa, New Hampshire and South Carolina, the first three states voting for a would-be nominee.

Campaign manager Barry Bennett said Carson maintains a broad appeal and has teams mobilizing on his behalf in Iowa and South Carolina, states where evangelical and anti-establishment conservatives are in excess. That, Bennett said, guarantees Carson will perform well enough in February balloting to be strong heading into March, when more than half of the delegates required to win the nomination will be at stake.

Bennett said Carson’s Iowa staff still has 35,000 firm commitments from Republicans who say they will attend caucuses on his behalf. If Carson actually attracts that much support on Feb. 1, he’d almost certainly finish at or near the top: Mike Huckabee drew 40,000 caucus-goers to win the state in 2008; Rick Santorum needed just less than 30,000 to nip Mitt Romney four years later.

Reflecting where the campaign believes Carson’s advantage rests, Bennett says the effort in both states will focus heavily on churches and their members who consider themselves evangelical voters. Yet some of the same candidates outflanking Carson on foreign policy also have strength among evangelicals, support from whom the doctor is banking on. Cruz has endorsements from Iowa power broker, Bob Vander Plaats, who backed surprise caucus winner Santorum in 2012, and the influential Focus on the Family founder James Dobson, among others.

When asked about Carson claims to have of 35,000 committed Iowa supporters, Cruz spokeswoman Catherine Frazier said, “I have no response to that” and walked away.

It’s fragile equilibrium for Carson. He must sell himself as a credible commander-in-chief and, even if he does, he could still lose while campaigning on his perceived strength among evangelicals.

Carson isn’t completely ceding the foreign policy front. He often reassures backers he will surround himself with able advisers, while quipping that his opponents—senators, governors and non-elected officials—also lack practical experience on the world stage.

After drawing criticism for blunders like suggesting China was militarily engaged in Syria’s civil war, Carson began peppering many of his campaign speeches with details on world affairs. At several recent campaign stops, he spent several minutes on the tactical details of how coalition forces could retake the city of Raqqa, Syria, the Islamic State’s de-facto capital. He’s published foreign policy op-eds in The Washington Post and The Telegraph of London.

Yet, Carson and his aides contend the new foreign policy dynamics of the GOP race are temporary.

“That’s what we’re seeing now with all the candidates raising their voices and talking tough,” Bennett continued. “But that fades pretty fast, and then it becomes about who has the best ideas.”

In Iowa last week, he reverted to the heart of his strategy which pegs him as a political outsider, pitching his poverty-to-fame autobiography, unabashed Christian faith and unceasing indictment of conventional politics, and he largely steered clear of national security and foreign policy. He bemoaned the national debt, offered ideas for replacing the Affordable Care Act and touched only briefly on the debate over immigration and Muslims that has gripped the Republican Party.

“Hopefully the American people will come to recognize that strength is not defined by the volume with which one says something,” Carson said in an online video last week.

His Iowa supporters agree. Erik Mosbo, 58, of Rembrandt, Iowa, said he hopes Trump “will say something and … explode” so Carson “can calmly fill the void.”

Finding the right balance is how Carson will win-or-lose voters like Mark Shea, who went to see Carson speak at a town hall in Storm Lake, Iowa. The 44-year-old from Galva, Iowa, said he’s torn between Carson and Cruz.

Shea praised Carson’s faith and his critique of the politics-as-usual approach of other candidates, but acknowledged that his lack national security experience may come back to haunt him.

“It’s becoming a more important issue right now,” Shea said of foreign affairs. “That’s on the forefront of our minds.”