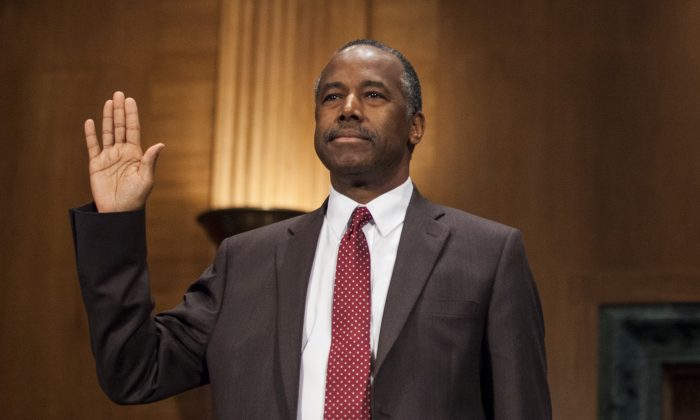 Carson Defends His Qualifications to Be Housing Chief

WASHINGTON—Former Republican presidential candidate Ben Carson defended his experience and credentials to serve as the nation’s new housing secretary Thursday, turning to his life story to show that he understands the needs of the country’s most vulnerable.

President-elect Donald Trump wants Carson, a former rival for the GOP nomination, to lead the Department of Housing and Urban Development, a sprawling agency with 8,300 employees and a budget of about $48 billion.

At his confirmation hearing before the Senate Banking, House and Urban Affairs Committee, the famed neurosurgeon talked about growing up in inner-city Detroit with a single mother who had a third-grade education and worked numerous jobs to keep a roof over their heads and food on the table.

“I have actually in my life understood what housing insecurity was,” he told lawmakers. He credited his mother with showing him the importance of perseverance, hard work and independence.

Democrats in the GOP-run Senate questioned his experience. Carson said one of the things he’s learned in private life is how to select a good CEO. He says a good CEO doesn’t necessary know everything about running a particular business, but he knows how to select people and use their talents.

Carson said HUD’s rental assistance program is “essential” to millions of Americans. Taking away social safety net programs without providing alternatives would be “cruel and unusual,” he said.

At the same time, he added: “We don’t want it to be way of life … we want it to be a Band-Aid and a springboard to move forward.”

Sen. Elizabeth Warren, D-Mass., grilled Carson about whether he would be able to guarantee that “not one dollar” of HUD money would go to the Trumps.

“I will not play favorites for anyone … I will manage things in a way that benefits the American people,” Carson told her.

Carson displayed a softer approach toward the role of the federal government than he sometimes did on the presidential campaign trail. When reminded that he had called for across-the-board agency spending cuts of 10 percent during the campaign, Carson noted that he later modified that amount to 1 percent. When reminded of sweeping changes he called for in Medicare and Medicaid, he said “safety nets programs are important.”

Carson also talked about taking a more “holistic approach” to helping people and developing “the whole person.” For example, he said, HUD should work with the Education Department to develop apprenticeship and mentoring programs.

Several former HUD secretaries, Democrats and Republicans, wrote the committee in support of Carson, saying they believe he would listen to staff to help fulfill HUD’s mission of affordable homes and inclusive communities. The letter was signed by Henry Cisneros, secretary under President Bill Clinton, and Mel Martinez, Alphonso Jackson and Steven Preston, who worked for President George W. Bush.

The soft-spoken Carson grew up poor. He attended Yale University and the University of Michigan Medical School, and was the first African-American named as head of pediatric neurosurgery at Johns Hopkins Children’s Center in Baltimore.

In 1987, at age 35, Carson pioneered surgery to separate twins joined at the back of the head. In 2013, he entered the national political spotlight when, during the National Prayer Breakfast, he railed against the modern welfare state. President Barack Obama was sitting just feet away.

Before Thursday’s hearing, Carson had said little publicly about affordable housing, homelessness and other HUD-related issues. In a 2015 opinion piece, he criticized an Obama administration fair housing rule as government overreach. At his hearing, he told lawmakers he would work with local HUD officials to “make sure that fairness is carried out.”