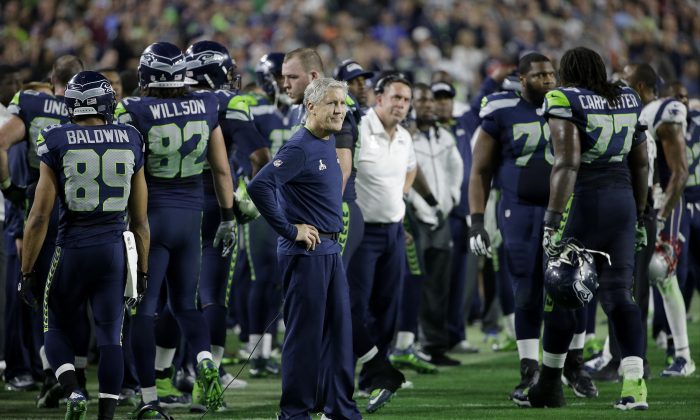 My initial reaction to Seattle’s fateful decision to pass on second-and-goal at the one with twenty-six seconds left was shock—and annoyance. I’m not really a Seahawks fan, but I picked them to win and expected a certain level of competence from the defending champs in return.

Instead Russell Wilson’s ill-fated pass ended up in the arms of never-heard-of-before New England safety Malcomb Butler and, after a couple more silly stunts by Seattle, the game was over.

A quick replay of it in my mind made Carroll’s decision to pass, all the sillier—this is the consensus of nearly everyone of course. You have one of the toughest running backs in the backfield in Marshawn Lynch and all he has to do is gain one yard over the next three plays and the game is yours—probably. Instead he passed the ball—which has a higher rate of disaster—and the game was lost right there. Indefensible—or so I thought.

Listening to Pete Carroll in the press conference though makes his controversial decision easier to understand. Said Carroll, “We have everything in mind, how we’re going to do it, we’re going to leave them no time, and we had our plays to do it. We sent in our personnel, they sent in goalline, it’s not the right matchup for us to run the football, so on second down we throw the ball really to kind of waste that play. If we score we do, if we don’t, then we’ll run it in on third and fourth down.”

Here’s his point. You don’t want to give Brady time to tie the game—that actually makes perfect sense.

If the Seahawks score a touchdown, it only gives them a three-point lead. A field goal would send the game to overtime. And at this point of the game (26 seconds left), New England still had two timeouts left. Wouldn’t have been impossible for Brady to get them in position to tie it.

And even though they have the best defense (on paper) Brady had burned them for 328 passing yards and four TDs. I can buy that.

Another point he has, is that New England was in goalline defense. The Pats were expecting the run—everyone was. A pass could catch them off-guard. Besides, Seattle was thinking they had two more plays to run. They were planning on running the clock down and winning it with Lynch.

Maybe he should have called a fade route towards the corner of the end zone where Wilson would likely either connect with the receiver or thrown it out of bounds. But again, I can see his point. It’s part of a larger plan and passing the ball when the opponent is in goalline formation isn’t the worst idea in the world—it just seems like it is, if it blows up in your face in the biggest game of the year.

One more factor in Carroll’s favor (that he didn’t mention and might not have even known) is a study shown on ESPN.com that seems to go against conventional thinking in these situations. The study shows that of the 223 rushing plays from the one-yard line this past season, 58 percent of them went for scores. But, of the 109 passing plays from the same place, 61 percent went for touchdowns.

If the intended receiver Ricardo Lockette catches it right there for the score, Carroll’s a genius for catching the Patriots by surprise. If it goes incomplete and they run it in on either of their next two plays, he’s a genius (a daring one) for intentionally wasting a play just to run the clock out. Unfortunately it was picked off and he looks silly for doing so. I get it now.