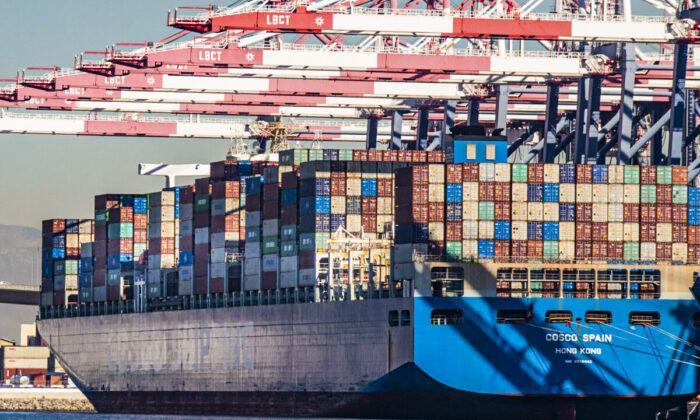 Delays in the transfer of cargo continue in Southern California as vessels line the horizon waiting to offload containers into the Ports of Los Angeles and Long Beach, Calif., on Oct. 27, 2021. (John Fredricks/The Epoch Times)
Economy

Carriers Must Move Thousands of Containers Out of Los Angeles Area by End of Halloween: Officials

Shipping companies must move thousands of containers out of the ports of Los Angeles and Long Beach starting Nov. 1, according to port officials, or they’ll begin to start facing hefty fines.

The Long Beach Board of Harbor Commissioners on Oct. 29 announced a fee on carriers who have containers linger on the docks, and the Port of Los Angeles board approved a similar measure on the same day.

“Containers that linger too long on the docks are delaying the berthing of vessels, leading to record numbers of ships waiting off the coast, and consumers and businesses across the U.S. left waiting for crucial shipments,” Port of Los Angeles commissioners said.

The new program carries fines of at least $100 per day per container, according to the Los Angeles Harbor Commission in a news release. Executives at the port stressed that the move is not designed to increase ports’ revenue.

They stated that about 40 percent of import containers on terminals are idling there for at least nine days, and before the pandemic, containers remained in terminals for an average of four days, the news release said.

“If progress is being made clearing our docks, I have the discretion to delay the start of fees beyond Nov. 15. Our goal is to see significant improvement on our docks so that we don’t need to administer any fees,” Port of Los Angeles executive director Gene Seroka said in the news release.

The Marine Exchange of California reported that as of Friday, there were 153 ships at anchor, berthed or cruising off the ports while waiting for dock space.

“This is the nation’s leading cargo gateway, and this crisis has national impacts. We need to take action to facilitate the rapid movement of cargo through the supply chain, and this plan will help,” Port of Long Beach Executive Director Mario Cordero was quoted by KTLA as saying. “Combined with our push for expanded hours of operation, more space for containers, and other measures, we are determined to eliminate the backlog.”

The fee amount will increase by $100 per day until the container leaves the terminal, officials said last week.

“This is the latest step in our collaborative efforts to ensure a more efficient supply chain. We’re not doing this to collect revenue … we need those containers to be moved off our terminals promptly,” said Steven Neal, Harbor Commission President. “We will do everything within our power to help our supply chain partners overcome the current challenges.”

But some shipping firms and trade groups last week expressed worry that the new fine would trigger catastrophic results. Some executives warned that the fine will trigger even more increases in prices.

“As far as the ‘hyper-demurrage’ announced in Los Angeles/Long Beach, I think it will be catastrophic,” Rich Roche, vice president of international transportation at Mohawk Global Logistics, said during a meeting with other trade groups last week, reported FreightWaves.

And Ken O’Brien, president of Gemini Shippers Group, said that “what was done this week at the ports of Los Angeles and Long Beach is effectively an indirect tax on the American consumer,” the report said.