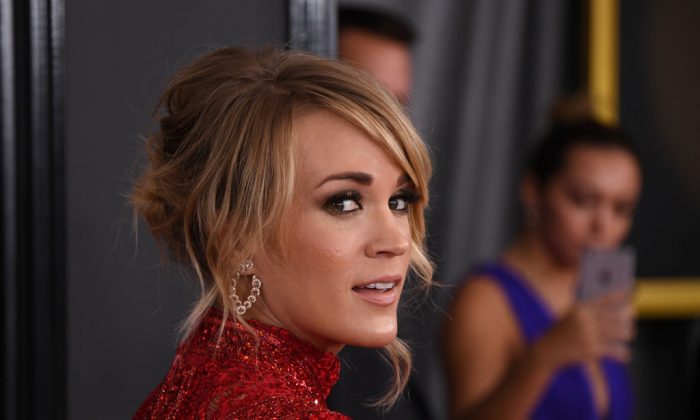 Country singer Carrie Underwood has told fans she is still suffering after a nasty fall on the steps of her house in November that resulted in more than 40 stitches on her face.

She had previously revealed that she broke her wrist in the fall, but on Sunday admitted that the fall had also caused severe cuts to her face.

The 34-year-old singer revealed the news in a note to her fan club members.

“There is also another part of the story that I haven’t been ready to talk about since I have still been living it and there has been much uncertainty as to how things will end up,” she wrote in the note, which was seen by People magazine. “It’s crazy how a freak random accident can change your life.”

She added: “In addition to breaking my wrist, I somehow managed to injure my face as well. I’ll spare you the gruesome details, but when I came out of surgery the night of my fall, the doctor told [Underwood’s husband] Mike that he had put between 40 and 50 stitches in.”

Underwood hasn’t been seen in public much since the accident seven weeks ago, according to Page Six. She has posted one picture on Instagram but most of her face was covered with a scarf.

Fans reacted to the news with compassion.

One said on Instagram: “I just saw a news story about your recent fall. First – praying for your recovery, and second – your face will be absolutely beautiful no matter what because it reflects the inside.”

Another wrote: “You are a beautiful soul inside and out. I’m sending you an abundance of healing vibes, strength, love and light your way! You are so brave for coming forward!”

Underwood is known as much for her singing as she is for her marketing deals with brands like Almay and Olay.

Underwood continued in her note: “I honestly don’t know how things are going to end up but I do know this: I am grateful. I am grateful that it wasn’t much, much worse. And I am grateful for the people in my life that have been there every step of the way.”

She finished on a positive note: “I am determined to make 2018 amazing and I want to share things with you along the way. And when I am ready to get in front of a camera, I want you all to understand why I might look a bit different.”