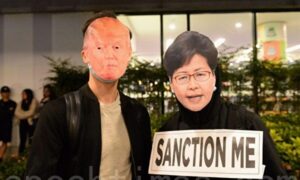 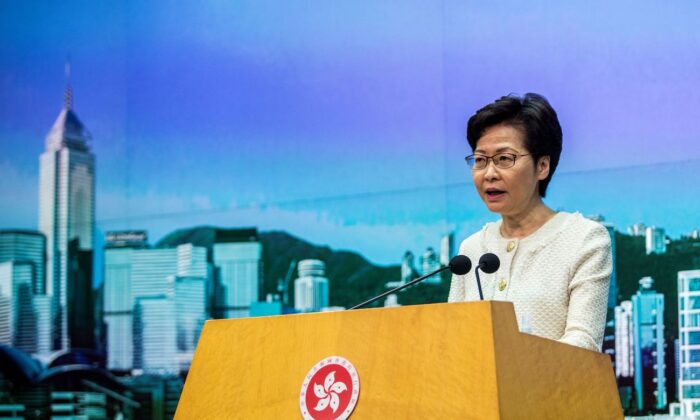 Hong Kong Chief Executive Carrie Lam speaks to the media about the new national security law introduced to the city at her weekly press conference in Hong Kong on July 7, 2020. (Isaac Lawrence/AFP via Getty Images)
Viewpoints

Hong Kong Chief Executive Carrie Lam read her policy address on Nov. 25—30,000 words of nonsense. But two things stood out: one is how she distorted the “one country, two systems” framework and betrayed the people of Hong Kong; and the other is how she collaborates with the Chinese regime and plans to transfer Hong Kong’s talent and reserves to the Greater Bay Area in mainland China.

Furthermore, all the policies that claim to “serve the people” are empty promises meant to deceive Hongkongers. Lam is just kowtowing to the Chinese Communist Party (CCP). After all, Chinese leader Xi Jinping gave her the title; she was not elected by the people of Hong Kong. The Hong Kong leader (chief executive) is elected by a 1,200-member election committee—a mostly pro-Beijing body chosen by a small group of eligible voters. There are roughly seven million Hong Kong residents.

Lam is a puppet for the communist regime and has earned herself the title of “Xi’s good fighter.” After more than a year of the anti-extradition bill protest movement, countless of Hong Kong protesters were injured and some have even lost their lives for fighting against the CCP’s encroachment of the city’s liberties.

As a communist official, Lam wholeheartedly supported the controversial extradition bill, which was formally withdrawn in October last year. But she will not quit until she has totally given Hong Kong to China.

Turning Hong Kong over to the communist regime is divided into two parts.

The first part involves dismantling the “one country, two systems”—a framework by which Beijing promised to preserve Hong Kong’s autonomy upon the city’s transfer of sovereignty from Britain to China in 1997, in accordance with the 1984-signed handover agreement, the Sino-British Joint Declaration. As part of this effort, Lam is assisting the CCP to “rectify” civil servants, the education, health and welfare sectors, and the media, and to extend the tentacles of autocracy to every corner of the city.

Last month, Beijing has disqualified four democratic legislators, leading to the resignation of 15 lawmakers from the pro-democracy camp of the Legislative Council (LegCo).

Lam defended Beijing’s national security law, which was implemented in July this year. The law criminalizes individuals for any acts of subversion, secession, terrorism, and collusion with foreign forces against the communist party state, with maximum penalties of life imprisonment.

Lam’s second task is to give all of Hong Kong to the CCP. Incorporating Hong Kong into the Guangdong-Hong Kong-Macau Greater Bay Area will abolish “one country, two systems” as it is a strategic deployment base for the CCP’s annexation of Hong Kong.

After Hong Kong is “emptied,” it will lose its vitality and its status as a global financial hub. When Hong Kong loses its bargaining power with the CCP, the regime can then secure its own position.

Lam understands this, and her policy goal is to go to great lengths to move Hong Kong’s most valuable talent and money to the Greater Bay Area and turn them into mainland China’s assets.

Lam’s policy address is full of self-indulgence and it’s a pity that the Hongkongers just won’t buy it.

In the history of Hong Kong, there has never been a leader who has done more harm to the city than Carrie Lam. The Hong Kong people will never forgive her. And some day, history will judge her.