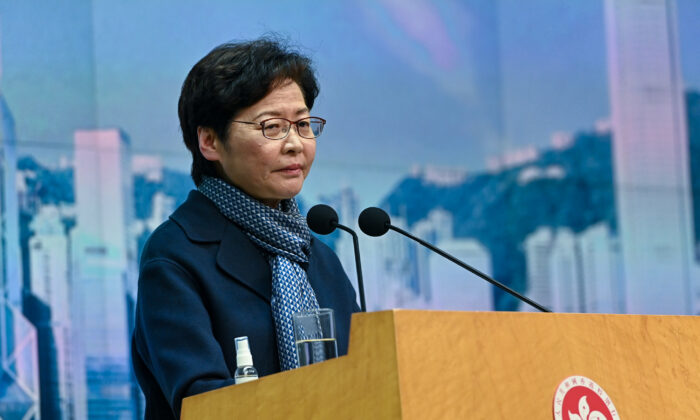 Outgoing Hong Kong Chief Executive, Carrie Lam Cheng Yuet-Ngor, whose five-year term ended on June 30 this year, has the lowest approval rating of any governor or previous chief executive of the city, according to a recent poll.

The Hong Kong Public Opinion Research Institute (HKPORI) held a press conference on June 7 to announce the results of its survey, “Summary of the Interim Sentiments of One Country, Two Systems for the 25th Anniversary.”

In a press release issued on the same day, HKPORI said that according to the standards of the Hong Kong Institute, no official in Hong Kong was considered to be “performing well” or “performing successfully,” and Carrie Lam was “performing poorly.”

The survey was conducted on 1,000 Hong Kong residents by random sampling telephone interviews from May 31 to June 5.

In the first six years after the handover, Beijing’s policy of governing Hong Kong was relatively loose, so the chief executive at that time was highly popular. Lau said that the performance of the chief executive and the three divisions—Home Affairs, Finance, and Justice—had a lot to do with Beijing’s tightening of Hong Kong’s governance policies.

Lau said that in February 2020, Carrie Lam’s approval hit a record low of only 18.2 percent following the anti-extradition protests in 2019, and the outbreak of the COVID-19 pandemic, coupled with the Chinese Communist Party’s (CCP) policy to firmly take control of Hong Kong and Macao and implement the “Hong Kong National Security Law.”

Carrie Lam took office as the fifth chief executive of Hong Kong on July 1, 2017. The most controversial issue during her tenure was the revision of the “Fugitive Offenders Ordinance,” also known as the “Extradition Ordinance,” which triggered the far-reaching “Anti-extradition Movement” protests that brought no less than 2 million of Hong Kong’s 7.5 million citizens into the streets.

Subsequently, Carrie Lam allowed the police to carry out a harsh crackdown, which put almost all pan-democratic members of the Legislative Council and many district councilors under siege, and more than 10,000 Hong Kong citizens under arrest.

Lam further cracked down on freedoms and the rule of law, while the media and dissenting voices were severely suppressed.

During her term in office, she also oversaw the adoption of Beijing’s “Hong Kong National Security Law,” which overrides Hong Kong’s original independent  judicial system that upheld the presumption of innocence until proven guilty.

As to whether the “one country, two systems” has been successful in Hong Kong, Lau said that it’s difficult to conclude at present, as he believes the system is still being developed. However, he added that the China-Hong Kong relationship is currently facing its most uncertain time.

Today, the Hong Kong government is influenced by the CCP’s official culture, which is increasingly fractured by different factions of the ruling party, with lower-level officials interpreting and implementing the policies of upper-level officials according to their own views, Lau said.

In addition, for CCP officials, there is no political cost for leaning toward the left, and therefore many prefer left rather than right, and this affects the overall political climate.