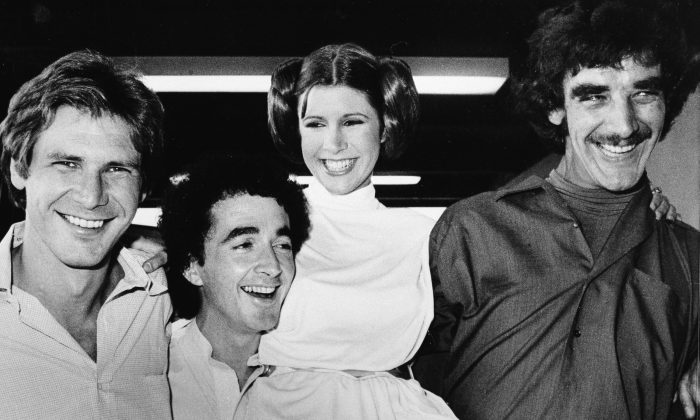 From left, Harrison Ford who played Han Solo, Anthony Daniels who played the robot C3P0, Carrie Fisher who played the princess, and Peter Mayhew who played the Wookie, Chewbacca, are shown during a break from the filming of a television special presentation in Los Angeles, Ca., Oct. 5, 1978. (AP Photo)
Entertainment

“It is with a very deep sadness that Billie Lourd confirms that her beloved mother Carrie Fisher passed away at 8:55 this morning,” Simon Halls, a spokesperson for her family, told People magazine on Tuesday.  “She was loved by the world and she will be missed profoundly,” read the statement. “Our entire family thanks you for your thoughts and prayers.”

Her mother, actress Debbie Reynolds, issued a statement on Facebook.

She suffered a heart attack while on a Los Angeles-bound flight about 15 minutes before landing. A medic on the plane performed CPR on her before landing. Then, paramedics arrived and took her to the UCLA Medical Center—where she was placed on a ventilator.

The daughter of actress Debbie Reynolds and singer Eddie Fisher, she made her film debut in 1975’s “Shampoo” before her major breakout role as Leia in the first three “Star Wars” movies.

“She has no friends, no family; her planet was blown up in seconds—along with her hairdresser—so all she has is a cause,” Fisher told Rolling Stone magazine about Leia in 1983 following “Return of the Jedi.”

She added: “From the first film [A New Hope], she was just a soldier, front line and center. The only way they knew to make the character strong was to make her angry. In Return of the Jedi, she gets to be more feminine, more supportive, more affectionate. But let’s not forget that these movies are basically boys’ fantasies. So the other way they made her more female in this one was to have her take off her clothes.”

Fisher also penned seven books, which detailed her drug use and struggles with mental illness. She had been promoting her book, “The Princess Diarist.”