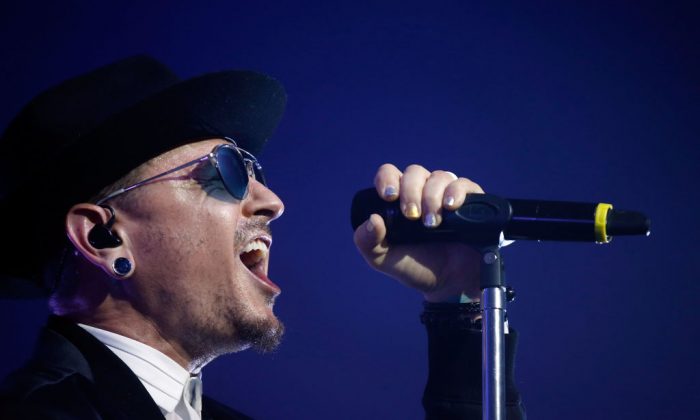 A “Carpool Karaoke” episode featuring Linkin Park is up in the air since Chester Bennington’s death. It is unclear at this point if the episode will be released to the public.

The singer committed suicide on July 20, less than a week after he filmed the episode. “We will approach it in whichever manner his family, or the people that were involved in that episode, however they would like it to be handled. We consider it not our decision to make,” said James Cordon, the show’s executive producer, in an interview with The Associated Press.

The Linkin Park lead vocalist hung himself. He left behind a wife and six children, as well as a shocked community of fans, fellow musicians, and recording artists, as reported in an earlier Epoch Times article.

The episode features Linkin Park members taking a car ride with actor Ken Jeong. A tweet sent out from Linkin Park’s Twitter account earlier shows Bennington in all black, along with Mike Shinoda, Joe Hahn, and Jeong, during the episode’s recording.

The day Bennington died, Jeong tweeted out “I am in shock and heartbroken. All my thoughts and prayers go out to Chester and his family and friends at this time.”

“We will navigate it as delicately as possible and just adhere to whatever wishes they would want. Because I don’t think there is any other way we could deal with it really,” said Cordon while deferring to Bennington’s family members and bandmates, in the AP interview.

“Carpool Karaoke” started as a segment on “The Late Late Show with James Corden.” After the popularity of the segment’s video clips skyrocketed online and became a viral hit, Apple launched a series expanding upon the concept. The series premiered Aug. 8, with an episode of James Cordon and Will Smith, as reported in the Guardian.

“Carpool Karaoke’s” biggest success was a 15-minute segment from “The Late Late Show” with singer Adele that reached over 165 million views on YouTube. The show features informal interviews and lighthearted singing, mostly taking place in a car.

“Carpool Karaoke” is available only on Apple Music. It is the second TV show produced by Apple that attempts to rival Amazon and Netflix in original programming.

Subsequent episodes in the 16-episode series feature Metallica, Ariana Grande, Shaquille O’Neal, and others. The following episodes also don’t feature Cordon in the driver’s seat, but instead use celebrity drivers, as CBS News mentions.