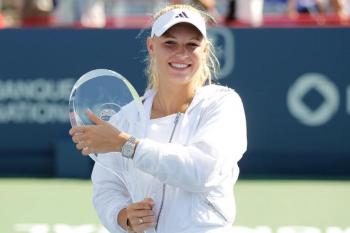 Caroline Wozniacki of Denmark poses for photographers after defeating Vera Zvonareva of Russia during the final of the Rogers Cup at Stade Uniprix on August 23, in Montreal, Canada. (Matthew Stockman/Getty Images)
Sports

Wozniacki beat her rival, Svetlana Kuznetsova of Russia, in one hour and twenty minutes with 6-2 and 6-3.

Currently ranked second in the world, Wozniacki is a native of Odense, Denmark. Earlier this year, she won one tournament held at the Ponte Vedra Beach and another in Copenhagen, her current city of residence.

Though suffering from a blister on her right foot, the athlete was ready to go for the win. “I don’t think about defending points, but I focus on winning my matches,” she posted to Twitter before the finale.