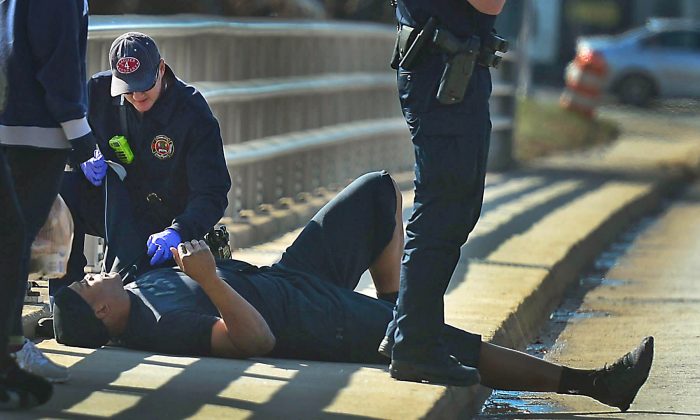 Panthers quarterback Cam Newton suffered fractures to his lower back in a two-car crash Tuesday and will spend the night in the hospital, a team spokesman said Tuesday.

Newton was in fair condition, had no other internal injuries and would not need surgery, team spokesman Charlie Dayton said during a news conference outside a Charlotte hospital. It was unclear if Newton would be able to practice or play Sunday against the Buccaneers, Dayton said.

“Right now we have thought about Cam’s well-being and we understand there was someone else in the other car who was injured,” Dayton said. “We just hope that they’re all OK.”

He was expected to be released from the hospital on Wednesday after undergoing tests.

Television footage showed Newton on a stretcher being placed in an ambulance after the crash. Photos from The Charlotte Observer showed the 25-year-old smiling as an officer attended to him on the ground.

A black pickup truck that Charlotte-Mecklenburg police spokesman Robert Tufano said Newton was driving was overturned on the roadway with debris scattered all over the street. The roof was caved in and a tow truck later was hauling it away. Another car that appeared to be involved in the crash had front end damage.

Coach Ron Rivera said Newton didn’t start the fight during the game against the Saints on Sunday.

Several Saints and Panthers were engaged in the fracas after Newton scored the second touchdown. The incident led to Carolina tight end Brandon Williams getting ejected.

“No, I don’t think he did it or the intent was in the guy’s face,” Rivera told the Charlotte Observer. “The guy just happened to be there. You could say that about any time a guy does a celebration. There are 11 defenders on the field. So a guy turns and does whatever they do, that’s it. The biggest thing is he didn’t use the ball, he didn’t use a prop. He just did his thing. So be it.”

Panthers linebacker Thomas Davis had choice words for the Saints’ fans after the blowout victory.

When Newton appeared to suffer an injury in the game, he said some members of the Saints fanbase were cheering.

“There’s really no place for that,” Davis told ESPN.

“That’s something that as a player, you never want to see a guy get hurt. When the fans are cheering because they think a guy is hurt, that’s disgraceful.”