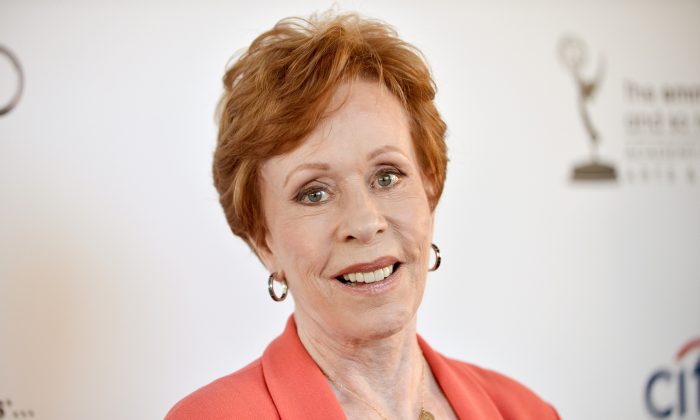 Actress and comedienne Carol Burnett at the Academy of Television Arts and Sciences' “An Evening with Carol Burnett” at the Leonard H. Goldenson Theatre in Los Angeles, on July 22, 2013. (Richard Shotwell/Invision/AP)
Entertainment

NEW YORK—Carol Burnett returns to Broadway in A.R. Gurney’s charming play “Love Letters,” in which an actor and actress read aloud letters, cards, birth announcements and notes they’ve sent to one another over decades.

Burnett will perform opposite a familiar face—Brian Dennehy. It will be the third time in a quarter of a century that they’ve played the would-be lovers together onstage.

The first time the couple did it was in 1993 in Telluride, Colo. The second time was at Sundance, Utah, at an outdoor stage. Naturally, it rained. And not just a gentle mist, either.

“It was coming down in sheets! The audience stayed,” said Burnett. “I said, ‘What are we going to do?’ And the stage managers came out with umbrellas, one of them holding it over me and the other over Brian. And we did the whole show.”

Burnett, 81, will be replaced Mia Farrow on Oct. 11, and she and Dennehy pair up until Nov. 8. The next slated celebrities include Alan Alda, Candice Bergen, Stacy Keach, Diana Rigg, Anjelica Huston and Martin Sheen.

Burnett said she and Dennehy naturally have a certain chemistry and the other couples will bring their own. “It’ll be a completely different dynamic because that’s the way it is with relationships,” she said.

The play looks deceptively easy, since it asks its actors not to rehearse, memorize, or interact until the end. They simply come out and read aloud the letters from binders.

“People who haven’t done it say, ‘Well, that should be real easy. You just sit and you’re reading and not looking at each other.’ But that’s what makes it harder,” said Burnett.

“Love Letters” marks Burnett’s return to the place where her career took off with critical acclaim for her Broadway work in “Once Upon a Mattress” in 1959. She went on to create her own variety show “The Carol Burnett Show” and then to films, including “A Wedding” and “The Four Seasons.”

She said her TV show, which aired from 1967–1979 and was chock full of her spoofing other TV series, movies, or just daily life, was a conscious attempt to recreate the vibe of Broadway.

“I wanted to do it like a live stage show. We did an original musical comedy revue a week, as if we were in summer stock,” she said. “I wanted that feeling. It was the best kind of job I could have.”