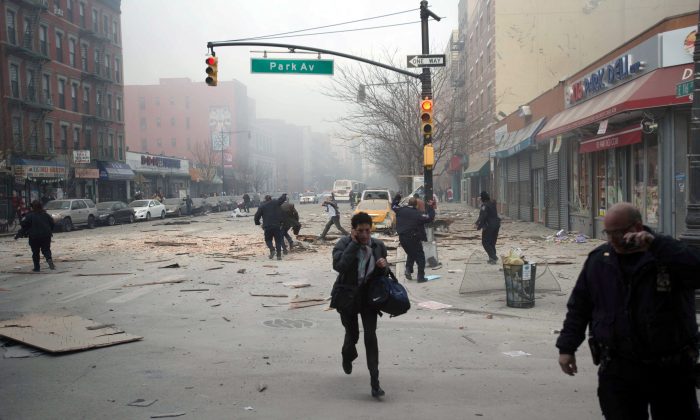 People run after an explosion and building collapse in the East Harlem neighborhood of New York, Wednesday, March 12, 2014. The explosion leveled an apartment building, and sent flames and billowing black smoke above the skyline. (AP Photo/Jeremy Sailing)
Crime and Incidents

By Zachary Stieber
Print
Carmen Tanco has been named as one of three victims in a gas explosion in East Harlem in the Manhattan borough of New York City on Wednesday.
Tanco, 67, was in her apartment on Park Avenue when the explosion happened around 9:30 a.m.
The explosion caused two buildings to collapse, leaving over 60 injured in addition to the dead.
And nine others are still missing late into the evening.
News 12 cameraman Angel Vargas, a cousin of Tanco’s, said that Tanco was a dental hygienist.
Her family went on a frantic search after she didn’t show up for work.

(AP Photo/Jeremy Sailing)
The explosion shattered windows blocks away and caused the ground to rumble even further.
The two buildings it toppled were five stories tall each. They were on Park Avenue at 116th Street, near the northeastern corner of Central Park.

By evening, rescue workers finally began the search for victims amid the broken bricks, splintered wood and mangled metal after firefighters spent most of the day dousing the flames. Heavy equipment, including back hoes and a bulldozer, arrived to clear the mountain of debris where the two five-story East Harlem buildings stood. Flood lights were in place. Thermal imaging cameras were at the ready to identify heat spots — bodies or pockets of fire.

The recovery was facing hardship in the form of the weather, which was expected to drop into the 20s with rain. Some parts of the debris pile were inaccessible because of a sinkhole caused by a subsurface water main break, officials said.

“It felt like an earthquake had rattled my whole building,” said Waldemar Infante, a porter who was working in a basement nearby. “There were glass shards everywhere on the ground, and all the stores had their windows blown out.”