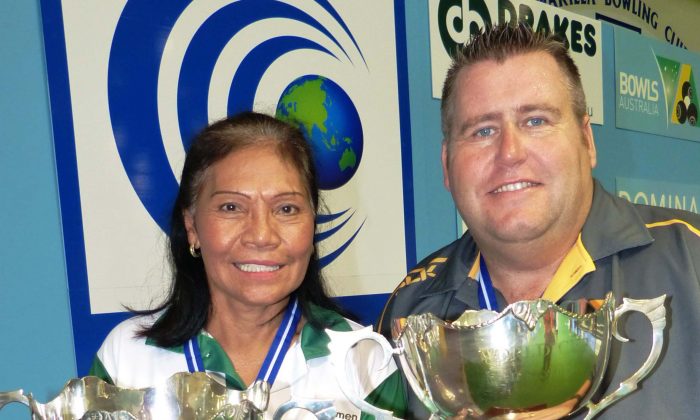 The finals of the World Cup Singles Championship took place at the Warilla Bowls and Recreation Club, Australia on March 23, 2016.  Superstars Siti Zalina Ahmad (defending champion) from Malaysia and Norfolk Islander Carmen Anderson met in the final of the women’s event with Carmen Anderson winning 6-5, 7-6.  In the men’s event Jeremy Henry ex-Ireland International now representing Australia beat Andrew Kyle of Ireland 8-6, 9-3 to take an unprecedented fourth title in five years. Earlier in the day Henry defeated Scott Roberts of United States in semi-final 2, 10-5, 15-2 to progress to the final.

Hong Kong bowlers once again returned empty-handed from the World Cup Singles Championship. Both representative Kevin Fung and Dorothy Yu were mingling at mid-table level after completion of the roundrobin and unable to qualify for the knock-out stage.

Fung and Yu got a timely morale boost before heading to Australia when they both won the National Champion of Champions Singles a few days before departure.

Fung started the competition with confidence, defeated Gavin Ansari from Scotland and Ozkan Akar from Turkey in the first two games.  In the third game onward he showed a slide in form and lost three consecutive matches against players from Japan, Philippines and Canada.  He pulled one back in the sixth game against Samuela Tuikillgana from Fiji but lost the next two games.  He rounded-up his tournament with a victory against South African Rudi Jacobs but it was too little too late.

In the last game Yu faced former world number one Siti Zalina Ahmad and it proved tough for her.  After each took a set, the game entered the tie-breaker to decide the winner.  Siti displayed her quality as a former world champion and took the set 5:0 to finish top of the group.

Yu finished level on points with third-placed Carla Krizanic of Australia but an inferior shot difference ended her journey in the tournament.

The World Cup Singles Championship was held at the indoor greens of the Warilla Bowling Club in Australia with 21 countries participating.

Hong Kong won the ladies gold and men’s silver in the inaugural event back in 2005 when it was held in Hong Kong.  Since then Hong Kong bowlers have never entered the knock-out stage of the event.