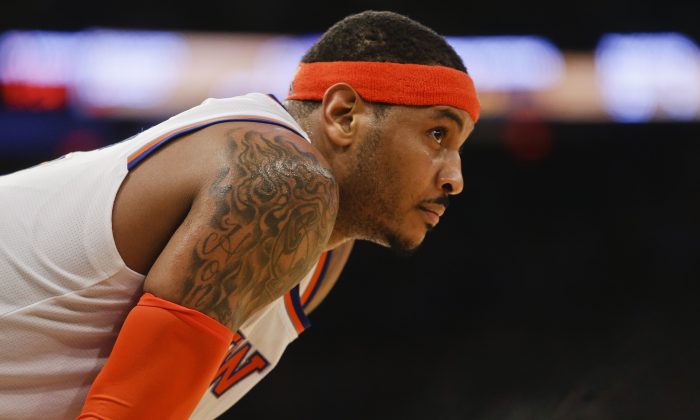 Amid a horrible season for the New York Knicks, a number of hypothetical deals involving Carmelo Anthony were put forth by a magazine.

Complex Magazine used ESPN’s trade machine, which enables fans to put together deals that would work in the real life, to find 15 potential deals involving Anthony.

One that caught the attention of fans, and started trending on Twitter, was Anthony to the Los Angeles Lakers for Kobe Bryant. They each make a similar amount of money, with Carmelo making $22.5 million a year and Kobe making $23.5 million a year.

“The universe is a strange place, and we’ve seen weirder things. Just imagine Kobe playing for former teammate Derek Fisher while former coach Phil Jackson sits up in the box eating Nips and thinking about getting custom loafers for each day of the week like the 70-year-old man he is,” Complex said.

“The Lakers get a star to build around in the near future and the Knicks get a huge contract that expires in 2015.”

Another posited trade is Carmelo to the Chicago Bulls for Derrick Rose and Doug McDermott.

“If you’ve been watching the Chicago Bulls this season, you see a great team that’s been dragging Derrick Rose along. He’s had some nice games and hit a few clutch shots, but he’s shooting 40 percent from the field and 25 percent from three (yet he still shoots a career-high five per game?),” Complex noted. “He largely favors jumpers more than driving to the rim these days. Basically, he’s washed. Melo would hop, skip, and jump to Chicago in a heartbeat after his horrific decision to snub the Bulls this past offseason.”