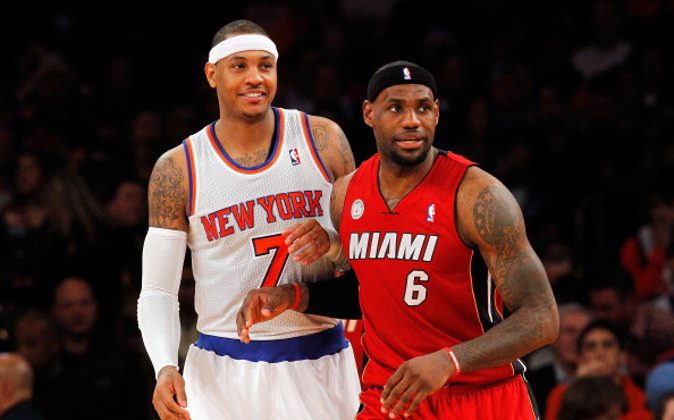 NEW YORK, NY - MARCH 03: (NEW YORK DAILIES OUT) Carmelo Anthony #7 of the New York Knicks in action against LeBron James #6 of the Miami Heat at Madison Square Garden on March 3, 2013 in New York City. The Heat defeated the Knicks 99-93. NOTE TO USER: User expressly acknowledges and agrees that, by downloading and/or using this Photograph, user is consenting to the terms and conditions of the Getty Images License Agreement. (Photo by Jim McIsaac/Getty Images)
NBA

The Heat are contemplating options this off-season on adding New York Knicks star Carmelo Anthony to their current ‘Big 3’ of Lebron James, Dwyane Wade, and Chris Bosh, according to a new report from ESPN’s Brian Windhorst and Marc Stein

ESPN’s Stephen A.Smith also promotes the likelihood of a James-Anthony alliance in general.

“If both ended up being members of the 2015 free agent class, I think there’s a better than 90% possibility that they would end up playing together because I happen to know it’s something that they both want to do”, says Smith.

Smith adds emphatically that the destination for the team up is still unclear at this point. Rather, he believes that if both players became free agents, they would take the chance to unite, wherever it may be.

Though the idea of a Big 4 featuring Carmelo Anthony in South Beach is certainly intriguing, its begs a number of questions, starting with these three.