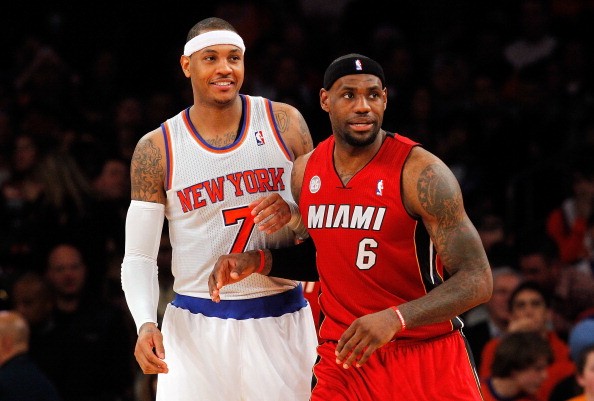 Carmelo Anthony #7 of the New York Knicks in action against LeBron James #6 of the Miami Heat at Madison Square Garden on March 3, 2013 in New York City. (Jim McIsaac/Getty Images)
NBA

Carmelo Anthony will opt out of his contract in order to explore the free agent market, reports say on Sunday.

The reports included the Chicago Tribune citing a source, as well as ESPN.

Anthony’s free agent market test will include a pitch from the Chicago Bulls, the Tribune said.

The Houston Rockets, Dallas Mavericks, and Miami Heat are among the teams said to be interested in Anthony, who can re-sign with the New York Knicks if he chooses after opting out of the contract.

The teams interested in Anthony are checking into a straight up signing as well as sign-and-trade deals.

Anthony has to inform the Knicks by Monday whether he’s going to opt out or not.

If Anthony does depart from the Knicks, some say that new team president Phil Jackson may not miss him.

The New York Daily News noted that Jackson may be fine rebuilding without Anthony, perhaps instead making a big push for Kevin Durant in a couple of years, or even LeBron James.

“What we don’t know, because only Jackson knows, is whether he would actually be quite happy to rebuild the Knicks without No. 7. Phil keeps saying he wants him back, he’d be a fool not to. But does he really? Or is he willing to let Melo walk and make his big play for Kevin Durant in a couple of years, as the Knicks begin to set their sights on Durant the way they once did, in vain, on LeBron James?”