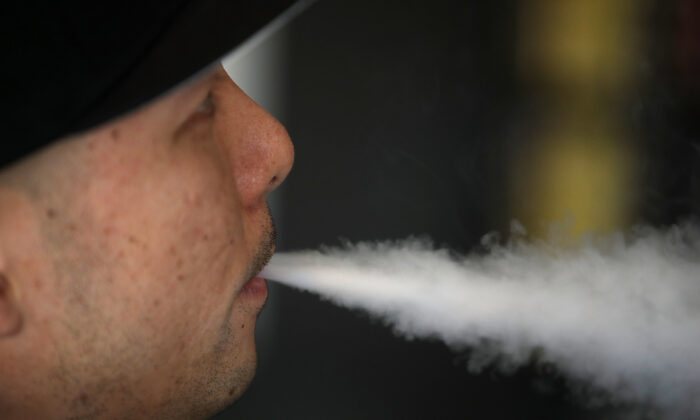 A California woman known to be a pioneer of the CBD industry could spend the next four decades in prison for drug trafficking and money laundering, say federal prosecutors.

Janell Thompson moved from Utah to the San Diego area in 2010, according to an investigative report by the Associated Press. Although she had a background in financial services, her personal vaping habit would eventually lead her from the party scene to a federal courtroom.

Thompson’s roommate, Katarina Maloney, also vaped and together they founded an e-cigarette company called Hookahzz. The duo sold CBD (cannabidiol) capsules and edibles, as well as products for pets. They enjoyed early success in the vaping and CBD industry and soon became known as “the divas of CBD.” Within a few years they were handing out their products at an Emmy Awards pre-party, and their CBD vapes were included in Oscar nominee giftbags in 2014, according to the AP report.

But things took a turn for the worse shortly after the fall of 2017, when Thompson and Maloney started another company called Mathco Health Corporation. Within months, a product called Yolo—an acronym for “You only live once”—that was spiked with synthetic marijuana, without any ingredients or contact information listed on the packaging, began showing up in Salt Lake City stores.

By early last year, more than 50 people were poisoned from inhaling synthetic marijuana vapors from Yolo CBD vapes. Even though CBD vapes are legal and are not supposed to have any psychoactive effect, users said they experienced an intense high with hallucinations and seizures. Samples of Yolo tested in Utah labs contained no CBD but instead a synthetic marijuana that has been connected to 11 deaths in Europe, according to the AP.

Synthetic marijuana costs much less to produce than CBD extracted from hemp, which is farmed.

Following the Salt Lake City incident, authorities got a tip from a former Mathco employee, Tatianna Gustafson, who said the company was behind the Yolo products sold in Salt Lake City. In a complaint filed with California’s Department of Industrial Relations, Gustafson said Mathco or JK Wholesale—another business Thompson and Maloney had incorporated—was responsible for mixing Yolo and distributing it, the AP reported.

Financial records showed Thompson’s initials as the sales contact for Yolo, and her initials were found on receipts for Yolo product sold to a Utah-based company. And, another former Mathco employee, Justin Davis, told the AP that “the profit margins were larger” for Yolo than other products.

But Thompson wasn’t arrested until other vapes branded as Black Magic and Black Diamond poisoned more than 40 people in North Carolina. She was identified by a dealer as the person who supplied the liquid that went into the vapes.

Maloney, Thompson’s former business partner, has not been charged in the federal investigation.

Thompson, 42, of Carlsbad, Calif. plead guilty last month and is awaiting sentencing in January. She is one of five defendants in the case.

U.S. Attorney Geoffrey Berman said in a Sept. 5 media release: “Janell Thompson’s position as a company CFO and vice-president masked her true identity: a drug trafficker and money launderer. Through her wholesale company, Thompson distributed massive quantities of illegal and potentially dangerous synthetic cannabinoids throughout the U.S. Thompson now faces 40 years in prison for her crimes.”

According to the allegations, documents filed in the case, and statements made in court, Thompson was the vice-president, chief financial officer and co-owner of JK Wholesale, LLC, a consumer products retailer based in Carlsbad for five years starting in February 2014. During this time, she used the company and affiliated businesses to distribute large quantities of smokable synthetic cannabinoids, known as SSC, “K2,” or “Spice.”

The synthetic drugs were often branded with colorful graphics and distinctive names, including Yolo, and were deceptively branded as “herbal incense.” Some of the drugs were moved in bulk quantities, according to the Southern District of New York U.S. Attorney’s Office. The drugs are dangerous, addictive and often sold as “legal alternatives to marijuana.”

“Their actual effects can be unpredictable and, in some cases, more dangerous or even life-threatening,” the U.S Attorney’s Office said.

The four other defendants in the case are:

Meanwhile, The U.S. Centers for Disease Controls and Prevention (CDC) warns anyone who has purchased “synthetic marijuana” products, which consist of various manmade chemicals, not to use them and to throw them out immediately.

“These seemingly innocent little packages of ‘fake weed’ can cause serious side effects that are very different from those of marijuana. Synthetic cannabinoid products can be toxic,” the CDC warns. “As a result, people who smoke these products can react with rapid heart rate, vomiting, agitation, confusion, and hallucinations. Some have to get help from emergency medical services or in hospital emergency departments or intensive care units.”

Since then, the CDC has reported 34 deaths among more than 1,600 cases of vape-related illnesses. Most are linked to black market THC products, according to samples tested by the U.S. Federal Drug Administration (FDA).

The CDC recommends not using e-cigarettes, or vaping, products that contain THC—the active ingredient in marijuana—but measured that with a statement saying the exact cause of illnesses remains unknown.

“At this time, FDA and CDC have not identified the cause or causes of the lung injuries in these cases, and the only commonality among all cases is that patients report the use of e-cigarette, or vaping, products,” the CDC states. “No one compound or ingredient has emerged as the cause of these illnesses to date; and it may be that there is more than one cause of this outbreak. Many different substances and product sources are still under investigation.”

In its Morbidity and Mortality Weekly Report issued on Oct. 11, the CDC called the lung illnesses EVALI, which stands for “e-cigarette or vaping product use associated lung injury.”