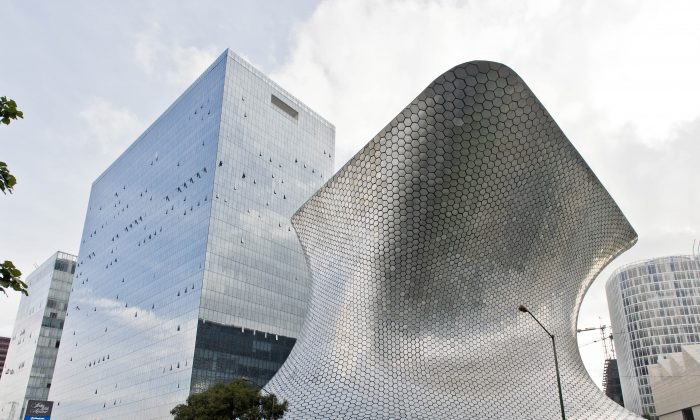 General view of the headquarters of the Carso Group and Soumaya museum of Mexican tycoon Carlos Slim, in Mexico City, on August 30, 2013. (Ronaldo Schemidt/AFP/Getty Images)
Americas

Mexican business magnate Carlos Slim, the world’s second richest man, has announced he intends to break up his América Móvil telecoms empire to comply with anti-trust reforms introduced by the country’s president, Enrique Peña Nieto. The move has been hailed in the international media as a victory for Peña Nieto as he attempts to open up the industry to competition and to curb the power of the country’s telecoms giants.

But it is nothing of the sort. These reforms represent yet another stich-up at the expense of ordinary Mexicans. After all, one should always be cautious about reforms that have been pushed overwhelmingly by the very industry they are supposed to regulate.

Since his election in 2012, Peña Nieto has dismantled progressive constitutional rights and accelerated the privatisation of government-owned companies. International investors and corporations have been allowed to further accumulate and control the country’s natural resources, no small matter for the world’s sixth largest producer of oil.

In common with Peña Nieto’s other reforms, the new telecommunications law inevitably favours Mexico’s economic and political elites. It reflects a trend which has continued unabated since the 1980s and which has witnessed a massive transfer of wealth from the poor to the rich, with now well over half the population living in poverty.

The reforms, which have been passed by congress but await Peña Nieto’s personal seal, stipulate that no company can control more than 50% of market share. On the surface, this would appear to be a welcome development. In theory it will indeed allow for smaller players to enter the market, increase competition, lower prices and offer consumers higher-quality and more diverse media products. But that doesn’t mean there aren’t lots of workarounds.

Take Mexico’s largest media company Televisa, for instance, owned by media mogul Emilio Azcárraga Jean (worth US$3 billion). The law doesn’t limit Televisa’s market share. Rather, it allows for media companies to diversify their investments. Article 9 will allow Televisa to acquire TV stations without requiring the authorisation of the regulators while another article guarantees that no limits be placed on how many paying channels it can operate, opening up huge new sources of profit.

As a result of the reforms, Televisa can extend its TV empire and also move into the mobile phone market. It’s the same elsewhere in the sector: Slim’s América Móvil, primarily a mobile phone company, can now invest in broadcasting, cable and satellite TV.

The claim that the new law will lead to higher-quality programming is similarly contradicted by new measures which will allow TV stations to use up to a third of their air time on commercials. Such a move is highly attractive to advertisers and TV executives alike, but unlikely to improve content.

The reforms do not threaten to disrupt the profits of Latin America’s telecommunications giants; quite the contrary, now they will no longer be confined to dominating one sector of the market. In such a context, smaller competitors will find it hard to enter and establish themselves in the market, given that telecoms giants will extend their share.

Investors seem to agree with this analysis: América Móvil shares jumped 10% when news of the “breakup” was announced, and Forbes reports Slim is poised to retake his “world’s richest” title from Bill Gates, after gaining US$4 billion this month alone.

Keep the Media on Board

Any line which separated Mexico’s super-rich from politics (only ever theoretical at best) has become so blurred as to be meaningless and the reigning elites have a shared interest in maintaining a healthy relationship with broadcasters, internet providers and phone companies.

Though Mexico has an enviable print media which includes a wide array of dissenting and critical voices and excellent investigative journalists, the same cannot be said for its broadcasters who reach a huge audience of which the print media can only dream. The favours and concessions granted to TV stations are another means of ensuring compliant and malleable mainstream media organisations, which already have a record of providing very favourable coverage to Peña Nieto and his party, the PRI.

The new law allows for telecoms companies, in collaboration with state agencies, to intercept and spy on the citizenry’s electronic communications. Under the pretext of fighting crime, such a move is clearly an attempt to spy on and repress Mexico’s burgeoning social movements, a feature of Mexican politics which has a long and sordid history. Yet it is also indicative of how big business and government co-operate and share a similar agenda.

Elsewhere in Latin America, several popularly elected governments are attempting to reverse some of the most destructive consequences of neoliberal policies. But in Mexico, no such luck. Peña Nieto has demonstrated his priorities are firmly aligned with the US government and international capital and not with those of the citizenry, among whom such policies are deeply unpopular.

That a handful of huge corporations owned by some of the world’s richest people will increasingly own, shape and mould the country’s principal sources of news and information is an unsettling prospect for the health and development of Mexican democracy.

Peter Watt does not work for, consult to, own shares in or receive funding from any company or organisation that would benefit from this article, and has no relevant affiliations. This article was originally published on The Conversation. Read the original article.