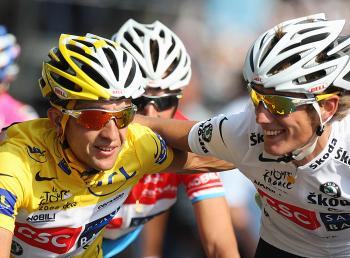 Team CSC rider Carlos Sastre won the 2008 Tour de France, after riding thousands of miles of hills and mountains in the space of three weeks, climbing mountains better than any other rider in the world, supported by the strongest team in the Tour, and sealing his victory with the best time trial performance of his life.

The final stage of the 2008 Tour de France was a winding hilly 143 km route through the farming fields and suburbs of Paris, ending in the city proper with eight laps of the Champs-Elysées, la Place de la Concorde and the Rue de Rivoli—a 3.8 mile loop through the heart of Paris.

Traditionally the Tour leader is not attacked on the final stage—he is allowed to ride in the peloton with his team. It is assumed that he and his team could respond to any attacks and maintain the leading margin; out of courtesy, his opponents let him enjoy the ride.

Still the stage win is highly prized; the sprinters would be assembling in the final kilometers to perform before the population of Paris.

Before arriving in Paris, the various riders chatted, exchanged congratulations, relived memories, and for the first time in three weeks, enjoyed a bicycle ride.

The final sixty km of the Tour were vigorously contested.

Arnaud Gerard of Francaise des Jeux was the first attacker, taking off at the very start of the final lap. A kilometer later, Gerard was caught and Phillipe Gilbert attacked. Another kilometer, and he too was caught.

With 3.5 km to go, Cofidis rider Sylvain Chavanel attacked; his break lasted until the final kilometer.

Quickstep led the peloton into the final kilometer; then Garmin Chipotle rider David Millar moved into the lead. Millar rode a great leadout for Julian Dean, but it was Gert Steegmans who broke out to the right and started to sprint with perhaps. 800 km to go.

With a few hundred meters to go, Gerard Ciolek exploded, sprinting with amazing speed, and catching Steegmans, but unfortunately, not until a few meters past the finish line. Oscar Freire tried to keep up, but ended up third.

Team CSC was undoubtedly the strongest team on the Tour. Though they didn’t have the most stage wins, they had the sharpest focus and the best teamwork.

CSC won, and Carlos Sastre won, because the team rode only for the yellow jersey. Many of the CSC riders could have won the Tour—the Schleck brothers, Fabian Cancellara, Jens Voigt, all were strong enough to have had a shot. Stuart O’Grady could have gone for stage wins, or Kurt-Asle Arvesen could have gone for more stages wins. Instead, the whole team decided to sacrifice personal glory for team success. In the end, it was team leader Carlos Sastre who was best positioned and best conditioned to go for the overall win, and his team delivered him to the podium in Paris.

Sastre sealed the team’s success with a brilliant time trial, the best he had ever done. Not a time trialer by nature, Sastre lost only 29 seconds over an hour of riding, finishing twelfth among the finest time trialers in the world, and maintaining the cushion his efforts and his team’s efforts had gained him.

Sastre also put in an excellent ride on Stage Seventeen, escaping from the entire pack on the slopes of l’Alpe d’Huez, outclimbing the rest of the Tour on one of the hardest mountains on the Tour.

Team Columbia managed five stage wins out of the first twenty stages—a 20 percent success rate. However, they could manage no better than seventh in the overall team standings, and by the end of the Tour, had no one contending for the overall victory. While they excelled on the flat stages, they lost a little in the mountains.

Still for a new team, the made an amazing entrance, showing that they will be a force to reckon with for many years to come.

Cadel Evans finished second in the Tour for his second year running. He told reporters that he wasn’t disappointed; he was pleased to have rode as well as he did after crashing so hard in Stage Nine. No one can fault Cadel’s Tour; if he had had a team like CSC to support him, who knows how it might have turned out.

Garmin Chipotle also showed great promise early but ended up fourteenth, two-and-a-half hours behind CSC. Christian Vande Velde made several excellent rides, as did Will Frischkorn, Danny Pate, and David Millar, but the team never came together as a team, and in the Alpine stages didn’t have the power to support Vande Velde completely.

This is another team that will only get stronger as seasons pass.

A Tour Worthy of Its History

Unquestionably, this year’s Tour was a success. Fans packed the roadsides, camping out a week in advance to save a choice spot on a mountainside, or hiking for hours to get a good view. The Tour was televised widely on both sides of the Atlantic—even in America the Tour was covered for several hours a day.

Despite doping scandals, political battles among sanctioning bodies, riders being banned, and the fear that the fans would lose faith, in the end, the people came out to see the riders, to cheer them on and to share the excitement of what is still the world’s premier cycling race.

This year’s Tour did not lack in competitive drama or amazing performances. Seven different riders held the yellow jersey, sometimes by no more than a second over the nearest competitor. Almost every stage this year was run at a very high pace, which shows that riders are coming to the Tour better prepared than ever before.

This year’s Tour was certainly not lacking in dramatic moments: from Mark Cavendish sprinting to four wins, to Luis Sanchez riding away from the field to win Stage Seven, to Leonardo Piepoli and Juan Jose Cobo outclimbing the peloton up the side of a mountain to win Stage Ten, the 2008 Tour offered up many moments of purely glorious cycling competition.

Quite obviously, the Tour—and professional cycling as a whole—does not need chemically enhanced athletes in order to succeed. The fans want to see the riders struggling against their human limits through effort and will, not due to drugs.

Cycling comes down to the riders’ willingness to suffer, to exert themselves despite pain, to endure hours in the saddle and to find, at the end of the day, enough energy to push harder up that last hill or through that last sprint. That is what the fans come to see, and that—and only that—truly measures the quality of the cyclists.

By that standard, the 2008 Tour offered quite a high level of quality indeed.

Doping Days May Be Over

The greatest threat to the Tour, and professional cycling in general, is undoubtedly doping. Doping threatens sponsorship, fan involvement, and thus media revenues.

Yet the most powerful cycling sports regulatory body, the UCI—the International Cycling Union—seemed not to be willing to address the issue. The organizers of the Tour therefore took matters into their own hands.

The Tour was run by French organizers ASO this year, but was not part of the Pro Tour series organized by the UCI because of disputes over drug testing. All the tests at the Tour were administered by the French Ant-Doping Agency. ASO did not feel that UCI was pursing a zero-tolerance policy sufficiently aggressively. This has split the pro cycling world, and the split may become permanent, with ASO trying to start a competing league.

The organizers of the Giro d’Italia and the Spanish Vuelta have also broken from the UCI over doping standards.

France made it a crime to use or possess banned performance-enhancing substances. Riders who tested positive this year—Riccardo Ricco, Manuel Beltran and Moses Duenas Nevado—were not just booted from the Tour; they spent a night in jail and had to endure questioning by the French police before being escorted out of the country.

Even with the more stringent, almost invasive testing regimen, some riders still try to sneak by. But with new testing standards, they get caught.

Teams like Saunier Duval, Barloworld, Astana… and riders like Tom Boonen, or last year’s winner Alberto Contador, who was banned from riding the Tour despite always testing clean, because his team wouldn’t accept ASO standards … the sport has lost much this year because of a small number of people who refuse to ride clean and think they won’t get caught.

Sponsors have departed because of the specter of doping as well. The United States Postal Service, Barloworld, Saunier Duval, and Discovery Channel have withdrawn from the sport because they cannot afford the potential scandal of sponsoring drug-users.

Team Columbia’s manager Bob Stapleton wants to see inter-organizer politics kept out of drug testing. “I would like to see politics stay out of doping. “I really want to see this in the hands of an international body that oversees all the testing," Stapleton told the Associated Press.

The other big American team, Garmin Chipotle, has set up its own, independent and very stringent blood-testing program—the strictest in all of professional sports.

Garmin Chipotle riders are tested twenty times more frequently than required by the UCI. Also, the testing company does not just search for known performance-enhancing drugs; drug manufacturers are always coming up with new, harder-to-detect drug. (Witness the EPO-derivative CERA used by Riccardo Ricco this year.) The laboratory that tests Team Chipotle looks for any abnormal fluctuations in normal hormone levels. If something odd is going on, even if the lab cannot identify the culprit, the test comes back as a failure.

The fact that this year’s Tour was so successful, commercially and competitively; the fact that the world’s best riders came out in force to race, and the population of many European nations turned out in large numbers to watch them—bodes well for the new direction taken by the more responsible people in professional cycling.

Cycling—The Best of What It Is to Be Human

In cycling, unlike many racing sports, the technology is widely shared, and no one gets an edge because of more money spent on equipment. Everyone has the best bikes; the teams that win have the best riders, coaches, and strategies. Therefore cycling is much more a test of man versus man, with the machine as a tool, rather than a test of who can bring the best machine.

This is one of cycling’s greatest appeals; when a fan cheers for a rider, he know s it is that rider who is making a winning effort, not his sponsor’s wallet. When a fan cheers for a team, he knows that all the other teams have just as much of a chance of winning—all the teams have the same information about the route, about training regimens, about their riders’ conditions. The difference comes from how the team mangers use that information, how the teams’ trainers use their experience, and how hard the riders are willing to push to help the team.