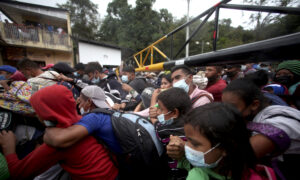 Why Are so Many Migrants Rushing to the Southern Border?
0
Share Now
TelegramFacebookTweetEmailTellMeWeReddit
Copy Link 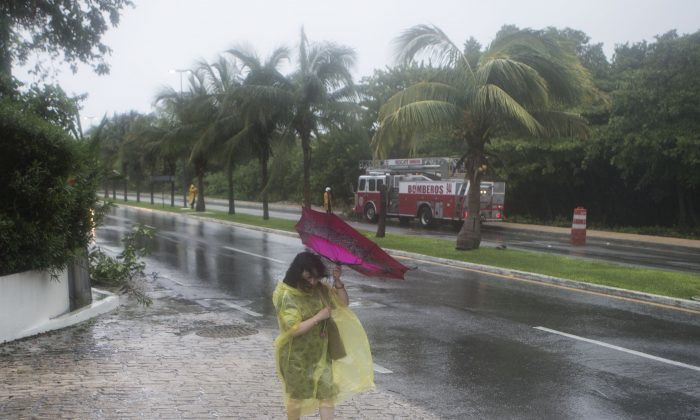 A woman has her umbrella twisted by the strong winds of a tropical storm as she walks down the main hotel strip in Cancun, Mexico, Sunday, June 14, 2015. (AP Photo/Christian Palma)
Americas

Carlos, Briefly a Hurricane, Weakens to a Tropical Storm

ACAPULCO, Mexico—Workers cleared hammocks and lounge chairs from beachside hotels and cafes as Tropical Storm Carlos churned up strong winds and waves Sunday and threatened to regain strength as it trudged up Mexico’s Pacific coast.

Carlos lost its brief hurricane status on Sunday as it weakened while sitting nearly stationary some 65 miles (110 kilometers) southwest of Acapulco, according to the U.S. National Hurricane Center in Miami, which measured top sustained winds at 65 mph (110 kph) Sunday afternoon. The former Category 1 hurricane was moving northwest at about 4 mph (7 kph), with strengthening expected into Monday.

Rain accumulations of 6 inches to 10 inches were possible in southwestern Mexico.

There were no reports of serious damage and only one injury, someone who fell from a fence, according to Jonathan Capote, spokesman for Guerrero state’s Civil Protection agency.

“Aside from a few fallen billboards and trees, we haven’t had any damage,” he said.

Beaches along the iconic Acapulco Bay, normally filled with families on a weekend afternoon, were nearly deserted as waves nearly 6 feet (2 meters) high broke against the shore, washing away small palm-frond huts.

Sergio Piña, 41, a business risk manager from Mexico City, stood among a group of spectators watching the wild weather.

In the distance out to sea, two surfers caught the big crashing waves as they rolled to shore.

Carlos, on Saturday, briefly became the third hurricane of the 2015 Eastern Pacific season. Forecasters said it still threatened to bring heavy rains that could cause life-threatening flash floods and mudslides.

Rain accumulations of 6 inches to 10 inches were possible in southwestern Mexico, with a chance for up to 15 inches in some areas, according to the hurricane center.