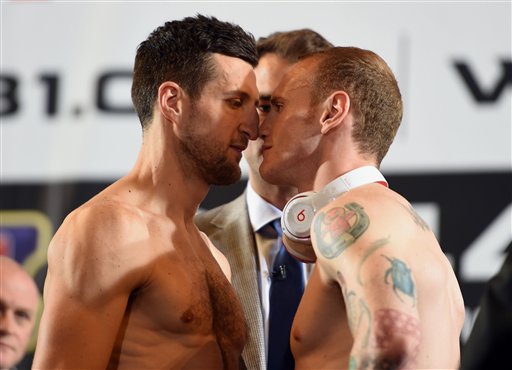 British boxers, Carl Froch, left and George Groves, go face to face, during the official weigh-in ahead of their super-middleweight world title rematch on Saturday, at Wembley Arena, in London, Friday May 30, 2014. Froch and Groves were given a taste of the atmosphere they can expect in their super-middleweight world title rematch when an estimated 7,000 raucous fans turned out just to watch their weigh-in on Friday. Both fighters made weight, with WBA and IBF champion Froch weighing 167 pounds, 9 ounces  just over a pound heavier than the challenger. (AP Photo/PA, Adam Davy)
Sports

The rematch between Carl Froch and George Groves, billed the biggest fight in British boxing history, is set for May 31.

The entire event will start at 6 p.m. BST but there are four fights on the undercard. The projected time for Froch vs Groves to start is 10 p.m.

“There might be a betting swing towards Groves with those types of odds; most punters would express favor for Froch, but the differences are so marginal that Groves seems much better value in the betting stakes,” according to the blog World Boxing News.

“Some people are starting to think that the fight won’t go the distance and some bookies are offering 11/8 for a full 12-rounder with Froch. Groves’ odds drift in the later rounds, suggesting he may have to secure a victory before round 7 or aim to take it on points (Groves dominated the first 7 rounds in the previous fight).”

“Froch’s odds tend to shorten slightly towards the final third of the bout and there’ll be a lot of money going on a victory towards round 9–just like the first fight,” it added.

The first fight, which took place in November 2013, ended in the middle of the ninth round after Froch left Groves shaken by a flurry of blows, prompting referee Howard Foster to step in.

Many people believed that Groves won, setting up the rematch.

The undercard is slated to start at 6 p.m. BST. James DeGale (18-1, 12 KO) is facing Brandon Gonzales (18-0-1, 10 KO) in a 12-round IBF eliminator that is labeled as the second-biggest bout of the night because the winner could face the winner of Froch vs Groves.

Also on the undercard are lightweights Kevin Mitchell and Ghislain Maduma (16-0, 10 KO); heavyweights Anthony Joshua and Matt Legg; and Jamie McDonnell vs Tabtimdaeng Na Rachawat, which will be fighting for the regular WBA title.

British boxers, Carl Froch, left and George Groves, pose during the official weigh-in ahead of their super-middleweight world title rematch on Saturday, at Wembley Arena, in London, Friday May 30, 2014. (AP Photo/PA, Adam Davy)

LONDON—British boxers Carl Froch and George Groves were given a taste of the atmosphere they can expect in their super-middleweight world title rematch when an estimated 7,000 raucous fans turned out just to watch their weigh-in on Friday.

Both fighters made weight, with WBA and IBF champion Froch weighing 167 pounds, 9 ounces — just over a pound heavier than the challenger.

Groves appeared the calmer in a face-off that took place inside a circle of bodyguards from both camps, grinning and shaking his head as Froch chatted in his ear.

The weigh-in took place at London’s Wembley Arena, adjacent to Wembley Stadium where about 80,000 spectators — a British record for a fight — will watch Saturday’s bout, billed as one of the biggest ever in the country. Froch won the first fight in November, despite being knocked down in the first round.

“The weigh-in was bigger than most fights,” said the 36-year-old Froch, who was booed by sections of the crowd. Groves is from London and is likely to be the fan favorite Saturday.

Froch said his rival has missed his best chance to capture the two belts, with Groves having dominated most of the first fight before it was stopped in the ninth round.