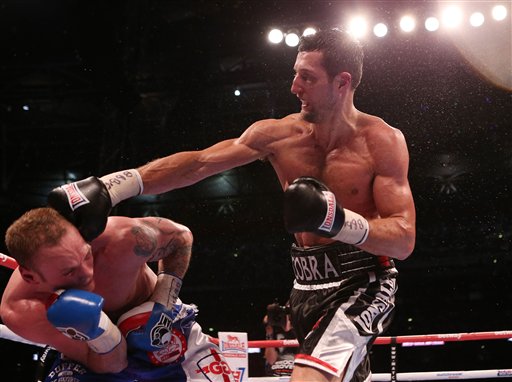 Carl Froch knocked out George Groves in the eighth round of their rematch on May 31.

Before the knockout, the two boxers appeared even although Froch had appeared to be gaining the upper hand in the round.

Groves complained following the referees’ stoppage of the fight following the vicious right hand hit from Froch, but many believed it was the right call–as opposed to last match, where the ref likely stopped the fight too early.

With the win, Froch retained his WBA and IBF titles.

“This is the greatest moment of my boxing career,” Froch said. “It’s the biggest event I’ve been involved in.”

Groves (19-2, 15 KOs) had started slower but grew into the fight, only to be knocked down with Froch’s biggest punch of the bout.

“I feel like I let myself down,” said Groves, who had vowed to send Froch into retirement with a victory. “Fair play, he got me with the punch.”

The rematch was not as exciting as the first fight, with both boxers more restrained and seemingly intent on lasting the full distance.

Froch — arguably Britain’s top boxer for the last five years — dominated the center of the ring but only first connected with a left hand in the third round that rocked back Groves.

Froch’s punches were generally ragged and he walked into some punches by Groves in the sixth and seventh rounds.

The ending was conclusive, though, with Froch swinging initially with his left and following it up with a massive right that left Groves in a heap on the canvas.

“It was neck and neck, there was nothing in it,” said Froch, who wants to crown his career with a fight in Las Vegas. “One punch was all the difference.”

The fight captured the public imagination, and was considered the biggest grudge match in British boxing since the days of the Nigel Benn-Chris Eubank rivalry in the early 1990s.