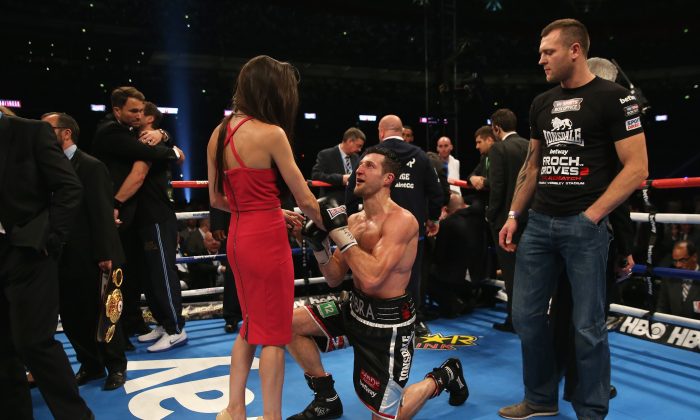 Carl Froch of England celebrates his victory against George Groves of England at Wembley Stadium on May 31, 2014 in London, England by proposing to his girlfriend. (Scott Heavey/Getty Images)
Sports

Carl Froch proposed to his girlfriend, model Rachael Cordingly, after he knocked out George Groves over the weekend.

Froch, 36, dropped to his knees in front of the 80,000 people after the win and popped the question.

Cordingly, 27, smiled and said yes and they hugged and kissed afterward.

The pair have two children together, Rocco and Natalia.

Froch confirmed that he had proposed but said that it’s not “official” yet.

“I did ask Rachael a sneaky question after the fight but it’s not official, he said, according to the Daily Mail. “I told her how much I love her. I didn’t actually officially propose to her. I was going to but I couldn’t sort a ring out.”

“I will be marrying Rachael one day. This is the most special moment of my life — the next will be wedding Rachael and making us a proper family, me, my kids and her. ‘This night will be remembered for defending title,” he added.

But pressed on how she responded to the unofficial proposal, Froch admitted that “she said ‘yes.'”

Froch’s next opponent, meanwhile, is uncertain. Possibilities seem to have narrowed down to Andre Ward, who previously defeated Froch, and Julio Cesar Chavez Jr.

Either way, Froch would like to fight at MGM Grand in Las Vegas.