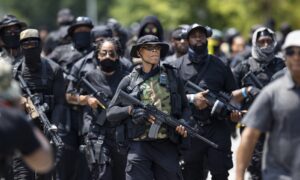 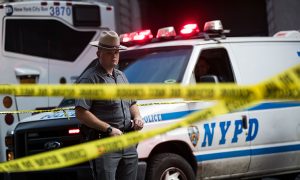 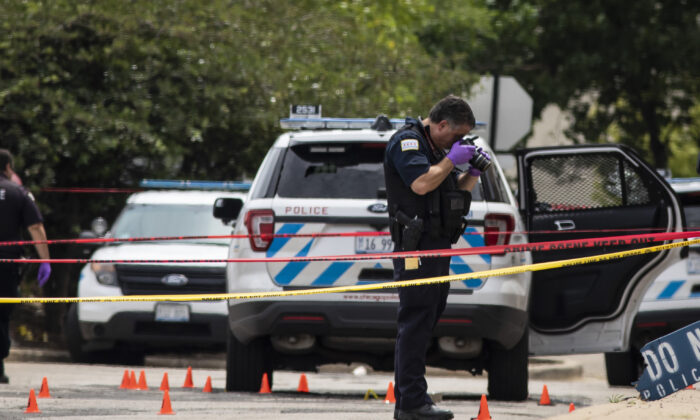 Chicago Police investigate at the 25th District station on the northwest side, in Chicago, after several officers were shot outside the station, Chicago, on July 30, 2020. (Ashlee Rezin Garcia/Chicago Sun-Times via AP)
Crime and Incidents

CHICAGO—A convicted felon on parole has been charged with attempted murder in the shooting of three Chicago police officers outside a station, authorities said Friday.

Police said Lovelle Jordan, a carjacking suspect, was being led into the station on Thursday on the city’s northwest side shot at police, who returned fire and wounded him. He faces six counts of attempted murder, as well as possession of a stolen vehicle and possession of a weapon as a felon.

The officers and gunman were taken to a hospital.

Deputy Chief Brendan Deenihan said police handcuffed Jordan’s hands behind his back when he was arrested but he apparently was able to move his hands to the front while being transported to the station.

Deenihan said Jordan, 26, was searched before being transported but police believe he had a gun “extremely secreted very close to his private area.”

“They didn’t do anything wrong,” Deenihan said of officers who made the arrest. “I will defend them. They’re out there working, they are wrestling with this guy and once again it’s the offender’s action, he’s responsible for shooting the officer in the face.”

A police spokesman said Friday morning that Jordan was still hospitalized. It’s unclear if he has an attorney able to comment on the charges.

Police have said he was wanted in connection with a June 26 carjacking in downtown Chicago. He said officers identified the stolen vehicle on Thursday morning, followed it and then took the driver into custody.