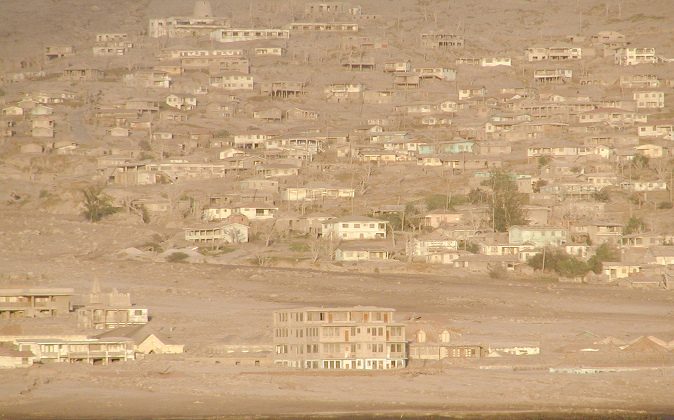 The eastern Caribbean island of Montserrat has suffered more than its fair share of natural disaster.

In 1989, Hurricane Hugo struck the island, causing massive destruction with more than 90% of the island’s structures damaged. In 1995, just as the island started to recover, the island’s Soufrière Hills volcano burst into life, entering a cycle of eruptive activity that continues to the present day. The eruption had an enormous impact on the island, killing 19 people, leaving two-thirds of the island nation uninhabitable, and in 1997 completely burying the capital city, Plymouth, under metres of volcanic rock, ash and mud. More than half the island’s population of around 10,000 were compelled to emigrate.

Today, however, Montserrat is putting this violent geological heritage to good use. Known as the “Emerald Isle” of the Caribbean due to historical ties with the Irish, Montserrat (in fact a UK dependent territory) is poised to become one of the world’s few metaphorically “green” and sustainable islands. The same geological forces unleashed by the Soufrière Hills volcano are being harnessed to power the island’s electricity grid from a geothermal source.

Geothermal energy, the productive use of the vast quantity of thermal energy within the Earth’s crust, is one of the few renewable, low-carbon emission energy sources that can consistently generate power 24-hours a day, irrespective of the season. Its primary limitation is not weather but location, as it can only be exploited in places with specific geology, where some of the Earth’s intense inner heat reaches close enough to the surface to be of use. Montserrat’s geology is ideal for geothermal use: hot molten magma rises to shallow depths, driven by the forces of regional plate tectonics. The heat from this magma warms the surrounding rocks, providing a heat source that can be tapped if it can be brought back to the surface. Rainwater and seawater are natural aids to this process as they penetrate through cracks and pores in the rocks to several kilometres beneath the island, absorbing heat from the magma heated rocks. Once heated, the hot fluid rises buoyantly to shallower levels where it can be tapped by drilling geothermal wells. As the ascending fluid boils it produces pressurised steam which rotates turbines to generate electricity.

The high cost of drilling wells (a single well can cost several million US dollars) coupled with the potential risk of drilling an unproductive well, are the principle reasons that geothermal potential has not been fully exploited. To increase the likelihood of drilling a productive well, the project to exploit geothermal power on Montserrat used an array of technologies, such as magnetotellurics and seismic tomography to more clearly understand the rocks beneath the surface.

Magnetotellurics uses naturally occurring signals from lightning storms and charged particles ejected from the sun to penetrate below ground. Seismic tomography uses the responses of pressure waves created by carefully generated explosions to generate images of the rocks. Aided by researchers at the University of Auckland these techniques were used to create the subsurface maps that have successfully guided Montserrat’s geothermal drilling programme.

Between March and September of 2013 the Iceland Drilling Company drilled Montserrat’s first two geothermal wells, to depths of 2,300 and 2,900 metres, striking temperatures of over 260°C. While testing is still ongoing, the initial results suggest that the fluid flowing from the wells will be able to generate more power than needed by the island’s reduced population of around 5,000 inhabitants. Once completed, the geothermal power station will free the island from its current reliance on expensive diesel-powered generators for its electricity – currently among the most expensive electricity in the world.

Montserrat is not the only nation in the region with geothermal aspirations. All of the islands of the Lesser Antilles have similar geological settings and therefore geothermal potential. The French island of Guadeloupe, with 15MW of installed capacity, is the only Caribbean island that currently uses geothermal energy for electricity, but recently private investment in St Kitts and Nevis and a European Union funded project in Dominica have also resulted in several promising exploratory wells, with discussions underway on other islands keen to harness their geothermal potential.

Geoscientists have recognised the geothermal potential of the region for many decades. But it is only in the past few years that the promise of a cheap, local energy source that can free the region from volatile oil prices has caught the imagination of regional governments and agencies.

Graham Ryan provides geothermal consulting work, including on Montserrat, through the University of Auckland’s Institute of Earth Science and Engineering, and received funding from the UK Department for International Development. This article was originally published on The Conversation. Read the original article.