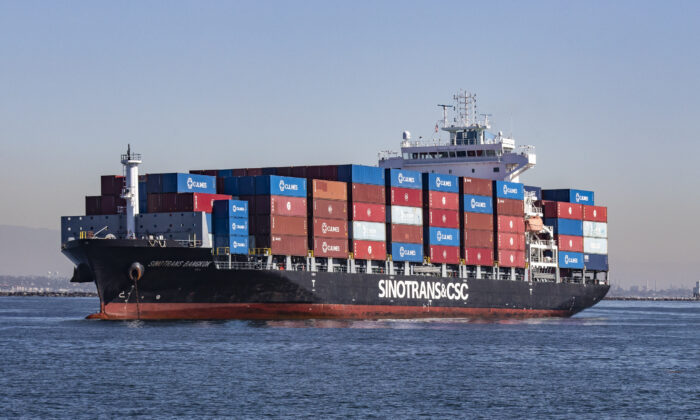 A boat awaits the offloading of cargo in the Port of Long Beach, Calif., on Oct. 27, 2021. (John Fredricks/The Epoch Times)
Southern California

While a growing number of Los Angeles-bound cargo ships are now biding time off the coast of Mexico, the supply chain crisis progressed this week as consumers found empty shelves in stores across the U.S.

“There’s a big population [of ships off the coast of Mexico],” Kip Louttit, director of the Marine Exchange, told The Epoch Times. “If you look at the Pacific, it kind of makes sense to go down there. The weather is better the further south you go.”

The number of ships waiting to deliver goods in Los Angeles has jumped about 12 percent since October when President Joe Biden announced the ports would be opened around the clock to ease congestion.

The marine exchange reported that 190 ships of all types were waiting in line to dock at the Los Angeles and Long Beach ports on Jan. 19. In mid-October, the number was about 170.

It also takes about two months longer to deliver goods from Asia to the Pacific Coast now than in 2019, before the pandemic, according to Flexport, a San Francisco-based freight-forwarding company.

In early January, Flexport found that westbound shipments from Asia took an average of 110 days—a 65-day increase and a new record high.

Meanwhile, consumers continued to express frustration across social media with supply shortages this week as #BareShelvesBiden trended on Twitter.

Photos of empty meat sections at a Tennessee Walmart have been shared, as well as empty shelves in Ohio, Missouri, and around the country.

According to Freeman, typically, U.S. grocery stores have 5 to 10 percent of their items out of stock. Now that rate is around 15 percent.

That’s enough to make a difference.

According to a recent poll by the Consumer Brands Association and Morning Consult, 70 percent of respondents said they experienced shortages at grocery stores in December.

But Biden told reporters on Jan. 19 that the supply chain crisis didn’t occur during the holidays last year.

The problem still hasn’t gone away.

Empty shelves and a shortage of car parts, electronic chips, and certain food products are becoming commonplace among businesses of all sizes in California, according to California Retailers Association President and CEO Rachel Michelin.

“It’s not getting as much attention as we were getting before, but there are still challenges,” Michelin told The Epoch Times. “I would say that on the supply chain side, it’s not getting any better.”

Michelin said small businesses continue to be especially vulnerable, not only because of the supply chain crisis, but also increased crime that’s being reported nationwide and the ongoing disruption of COVID-19.

As a result, customers will likely have to start paying even higher prices for goods in addition to the current 7 percent inflation rate, she said.

Meanwhile, officials haven’t yet been able to predict when the shipping backlog will ease.

Flexport reported earlier this month that the increased demand for goods in the United States is expected to stay and fixes by the Biden administration haven’t panned out.

“Despite attempts in October by the Biden administration to unclog U.S. West Coast ports there is still evidence that logistics networks remain congested,” and will remain so, potentially for at least another year, Flexport reported.