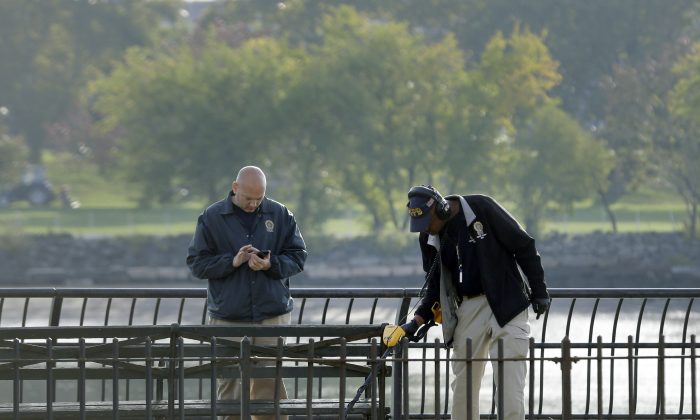 Police officers work at the scene, Wednesday, Oct. 21, 2015, where NYPD Officer Randolph Holder was shot in the head and died during a gunfight and chase on Tuesday night, in New York. Holder was responding to a report of shots fired. A suspect in his slaying is in custody, police said Wednesday. (AP Photo/Seth Wenig)
Crime and Incidents

NEW YORK—A man with a lengthy arrest record got out of jail and into a drug treatment program months before he was accused of gunning down a police officer while wanted in another shooting, infuriating the police commissioner and prompting a judge to defend his decision.

Tyrone Howard, who’s accused of stealing a bike and fatally shooting Officer Randolph Holder in the head after a chase Tuesday night, was arrested Wednesday on robbery and murder charges.

A visibly angry Commissioner William Bratton described Howard, 30, as a dangerous career criminal who never should have been on the streets, calling him a “poster boy for not being diverted” to a treatment-oriented drug court instead of to prison.

But the judge who referred Howard to the diversion program said he had no reason to believe Howard was violent.

“Why is this guy at least a candidate (for diversion)? Because nothing else has worked,” state Supreme Court Justice Edward McLaughlin said.

Howard, who has four felony drug convictions and did stints in state prison, was arrested in October 2014 along with 18 other people and charged with selling crack cocaine to an undercover officer at a public housing complex.

Police have more questions about the fatal shooting of yet another @NYPD officer https://t.co/L5ecARaSFo pic.twitter.com/ecdWFdxjpH

But McLaughlin was persuaded to refer the case to a team dedicated to screening candidates for drug treatment, a decision another judge approved, since Howard had no convictions for violent offenses and after reading a social worker’s report detailing Howard’s troubled home life and longtime addiction to PCP.

Howard, who has two children, then was bailed out of jail in February, pleaded guilty to the drug charge and was making regular court appearances until late August, when he skipped a court date, court system spokesman David Bookstaver said.

Days later, Howard shot and wounded a gang member, police said. Investigators had made 10 unsuccessful attempts to arrest him at various addresses before Tuesday’s shooting.

Police said Howard has been arrested 28 times since age 13 and had a history of violence. They said he was arrested in connection with a 2009 shooting that injured an 11-year-old and a 78-year-old.

“It’s unfortunate that there are people in our city, in our society, that, despite our best efforts … they’re criminals,” Bratton said. “And this individual, I think, is one of those.”

But McLaughlin said that he never saw a record indicating a shooting arrest and that a conviction for such a violent offense would have barred Howard from qualifying for the diversion program. A spokesman for prosecutors didn’t respond to questions about that arrest.

A lawyer who represented Howard in the recent drug case, Robert Levy, said his client was trying to get into a residential treatment program before he skipped his court dates.

Holder, a five-year veteran, made 125 arrests in his career and was awarded six departmental citations for his work. The Guyana native, 33, was the son and grandson of police officers and worked in a division that polices public housing developments.

Holder and his partner had responded to a report of shots fired near a public housing development in East Harlem. When they arrived, a man said his bike had been stolen at gunpoint and the thief fled with a group of people along a footpath near the East River.

The officers caught up to a man with a bike on a pedestrian overpass that spans a highway and traded gunfire, police said. After Holder was shot, the gunman ditched the bike and fled, police said. He was caught several blocks away with a gunshot wound to his leg, Bratton said.

Mayor Bill de Blasio said Howard was among the thousands of people responsible for a disproportionate amount of violence citywide. He echoed the police commissioner’s insistence that Howard should have been locked away, saying “someone like this shouldn’t have been on the streets.”