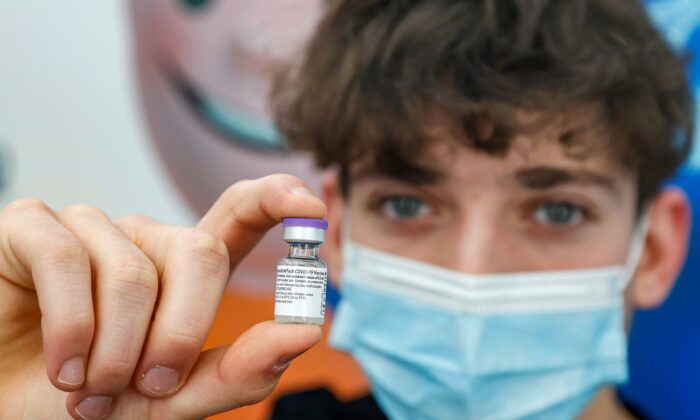 A 16-year-old receives a dose of the Pfizer-BioNtech COVID-19 vaccine at Clalit Health Services, in Israel's Mediterranean coastal city of Tel Aviv on Jan. 23, 2021. (Jack Guez/AFP via Getty Images)
By Margaret Menge

A pediatric cardiologist says that it’s clear from all of the available evidence that the spike proteins the COVID-19 vaccines tell the body to make are toxic to the heart, and that myocarditis in young people isn’t as rare as the Centers for Disease Control and Prevention (CDC) and Food and Drug Administration (FDA) have led Americans to believe.

In a lecture on Aug. 26, Dr. Kirk Milhoan, a board-certified pediatric cardiologist, said the harm to the heart caused by the spike proteins is an “inconvenient truth.”

Milhoan based his conclusion on data from the Vaccine Adverse Event Reporting System (VAERS) and several recently published studies on myocarditis.

“We’re seeing something that we haven’t seen before,” he said on Aug. 26 at the Gateway to Freedom Conference in Collinsville, Illinois. “We haven’t seen a vaccine cause this level of myocarditis. It’s not one here or one there. It is a large number of people getting myocarditis from this vaccine.”

Myocarditis, defined as inflammation of the heart muscle, is one of the only serious vaccine side effects that has been recognized publicly by the FDA and CDC, with the most recent guidance from the CDC repeating what the agency has said since 2021, that there is only a “rare” risk of myocarditis and pericarditis that has been observed after one of the mRNA vaccines.

Pericarditis is inflammation of the lining of the heart.

“Rare cases of myocarditis and pericarditis have occurred most frequently, although not exclusively, in adolescent and young adult males within the first week after receiving the second dose or a booster dose of an mRNA COVID-19 vaccine,” a CDC advisory in May 2021 states.

In his Aug. 26 talk, Milhoan said the evidence shows that infection with SARS-CoV-2, the coronavirus that causes COVID-19, likely results in the smallest exposure to the spike protein. In contrast, the mRNA vaccines cause the body to produce spike proteins for an unknown period, perhaps indefinitely.

The damage to the heart from myocarditis can be missed, he said, pointing to a study published in The Journal of the American Medical Association (JAMA). The study reviewed the cases of Big Ten Conference college athletes with a recent COVID-19 diagnosis and found that 37 of the 1,597 athletes studied were shown to have myocarditis when cardiovascular magnetic resonance (CMR) imaging was done. Only half of the 37 showed any heart issues with other testing methods, including electrocardiograms and by measuring troponin levels.

Looking at heart issues related to the vaccines, Milhoan cited a recent peer-reviewed study of 301 adolescents aged 13-18 from two schools in Thailand who received a second dose of the Pfizer–BioNTech vaccine.

Altogether, cardiovascular issues were found in 29 percent of the teens. Two had suspected pericarditis and four had suspected “subclinical myocarditis.” One had a confirmed case of myopericarditis.

The study involved 4,931,771 people aged 12 and up who were monitored for 28 days after vaccination. During the follow-up, 269 participants developed myocarditis or myopericarditis, 73 percent of them males.

Of the 3,482,295 people who received the Pfizer–BioNTech vaccine, 48 developed myocarditis or myopericarditis within 28 days, 1.4 per every 100,000 people, when compared to a baseline rate of unvaccinated people.

“That’s a very interesting story because the Pfizer product has about one-third of the mRNA that the body uses to produce the spike protein,” Milhoan said. “The Moderna has about three times as much.”

He said this “suggests a causation, not just a correlation.”

On Aug. 31, the FDA announced that it had authorized for emergency use the new bivalent booster vaccines (targeting the latest omicron subvariants and also the original virus) for people ages 12 and up for the Pfizer–BioNTech vaccine and 18 and up for the Moderna vaccine.

The CDC approved the vaccines on Sept. 1 following a presentation reviewing safety data from VAERS, the V-SAFE smartphone-based reporting tool, and the Vaccine Safety Data Link (VSD), which includes data from several large health maintenance organizations in the United States.

While the FDA and CDC have often referred to many myocarditis cases after vaccination as “mild,” Milhoan says that word is often taken out of context by government regulators.

“Is there such a thing as mild myocarditis? Yes, there is,” he said. “When a patient gets admitted to the ICU, we do an echocardiogram, we look at labs, we look at additional studies, and we say, ‘Does this look like a mild case, a moderate case, or a severe case?’”

The mild category, he said, is a term that doctors use for comparison with more severe cases in which a heart transplant might be needed.

“What I explain to families, though,” he said, “if your child needs to go to the pediatric ICU (intensive care unit), that does not seem mild to you, even though I might call it mild.”

According to the website OpenVAERS, there were 8,756 U.S. reports of myocarditis and pericarditis following a COVID-19 vaccination as of Aug. 26.

At a Sept. 1 meeting of the CDC’s Advisory Committee on Immunization Practices, CDC employee Tom Shimabukuro said that there have been 188.2 confirmed myocarditis cases per 1 million doses of the vaccines administered to males aged 12–39.

The age group with the highest number of cases confirmed by the CDC was males aged 16–17, with 78.7 cases of myocarditis per every 1 million doses of the Moderna and Pfizer–BioNTech vaccines.

“It’s not ethical to give a vaccine to a child and give them myocarditis if they may not have gotten myocarditis from a natural infection or if they have already been infected,” Milhoan told the audience on Aug. 26, referring to the Hippocratic Oath: “First, do no harm.”

“The question is, why would we be putting children at risk if their risk from COVID is very low?”