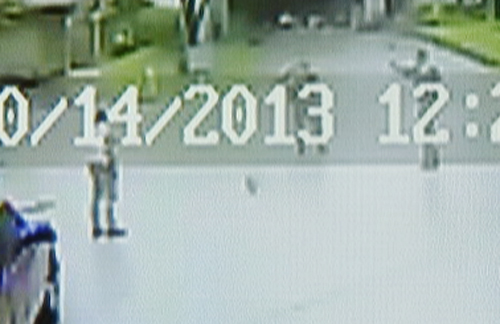 Cardan Spencer, a Dallas police officer who shot a mentally ill man, was fired and was later charged with aggravated assault.

DALLAS (AP) — A Dallas police officer who shot a mentally ill man in a disputed incident caught on tape has been fired and charged with felony aggravated assault, police said Thursday.

Police Chief David Brown apologized for the actions of the officer, who had been on administrative leave following the Oct. 14 shooting.

“Officers are not above the law,” Brown said at a news conference. “We as a police department are not going to look the other way.”

Officer Cardan Spencer wrote in a police report that he shot Bobby Gerald Bennett last week after the 52-year-old man lunged at him and another officer with a knife. But video captured by a neighbor’s surveillance camera shows Bennett didn’t appear to move toward the officers before he was shot and crumpled to the ground.

Brown did not immediately address whether Spencer was in custody or whether he has an attorney.

Bennett remains hospitalized in stable condition. He initially was charged with aggravated assault with a deadly weapon on a public servant, but Brown announced last week that the charge would be dropped.

Bennett’s mother, Joyce Jackson, said in an interview last week that her son has been diagnosed with schizophrenia and bipolar disorder and that he was off his medication at the time of the shooting. Jackson said she was arguing with Bennett when she called police. She was told that officers who have been trained in dealing with the mentally ill would arrive to assist her.

The officers arrived outside her southeast Dallas home to find Bennett sitting on a chair in the street holding a knife. At that point, the accounts of the incident differ.

The surveillance video doesn’t include audio, and Spencer wrote in his report that Bennett yelled at them, “You all are gonna need more officers than this!” But it doesn’t show that the incident “escalated, which led an officer to fire his weapon upon the individual,” as police spokesman Warren Mitchell said in a statement a few hours after the shooting.

Jackson’s attorney, George Milner, said Thursday that Brown was left with no option but to fire Cardan based on the video. Milner also questioned whether there was a “deficiency in training” that prompted the shooting and said there may have been negligence on the part of the police department.

“What happened 10 days ago should never have happened in the first place,” he said.