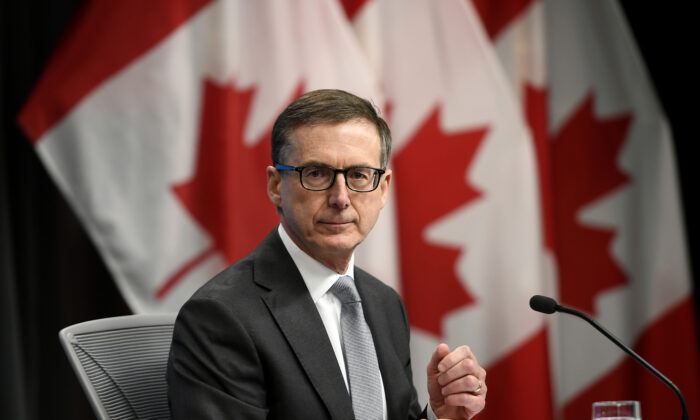 Carbon Tax Raises Inflation by Around Half a Point: Bank of Canada Governor

Macklem had testified before the House finance committee on March 3, where he was asked by Conservative MP Philip Lawrence what the impact of the carbon tax was on the rate of inflation. Macklem did not have that number available at the time but provided a written reply to the committee in a letter dated March 11.

“I committed to reply to the question of the impact of the carbon pollution charge on the rate of inflation,” he wrote.

“According to the Bank’s calculations, if the charge were to be removed from the three main fuel components of the consumer price index (gasoline, natural gas and fuel oil) it would reduce the inflation rate by 0.4 percentage points. In other words, if that policy had come into effect at the start of the year, January’s inflation rate would have been 4.7% instead of 5.1%.”

He also clarified remarks he made at the committee’s March 3 meeting that the annual increase in what he called the “carbon pollution charge” was adding 0.1 points to the consumer price index (CPI) each year. He noted that had the federal carbon tax not increased, “January’s inflation rate would have been 5.0% instead of 5.1%.”

Conservative MP and leadership hopeful Pierre Poilievre, who has long maintained that inflation is not only a global phenomenon as the government contends but is fuelled by domestic policies, was quick to jump on Macklem’s remarks.

Poilievre is opposed to the carbon tax and used Macklem’s words to take shots at his leadership race rivals.

“Bank Governor admits the carbon tax is adding to inflation. [Patrick] Brown, Trudeau and [Jean] Charest support the carbon tax. I have always opposed it and will scrap it,” he wrote on Twitter on March 14.

Charest supports a form of carbon tax and implemented a cap-and-trade system while he was Québec premier.

Brown supported putting a price on carbon emissions when he was leader of the Progressive Conservative Party of Ontario, but as Brampton mayor, he recently pleaded with the federal government not to go ahead with its scheduled carbon tax hike on April 1, which will add 11 cents a litre to the price of gasoline.

The latest inflation data from Statistics Canada indicates the 5.7 percent CPI in February was the highest since August 1991. Excluding gasoline, the CPI rose 4.7 percent year-over-year in February.

The Bank of Canada rose its rate by 0.5 percent on March 2 to try to begin stemming inflation. The next rate target announcement is scheduled for April 13, when the Bank will also publish its full outlook for inflation and the economy.