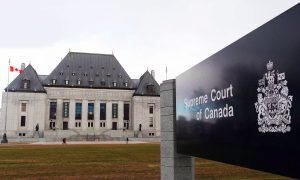 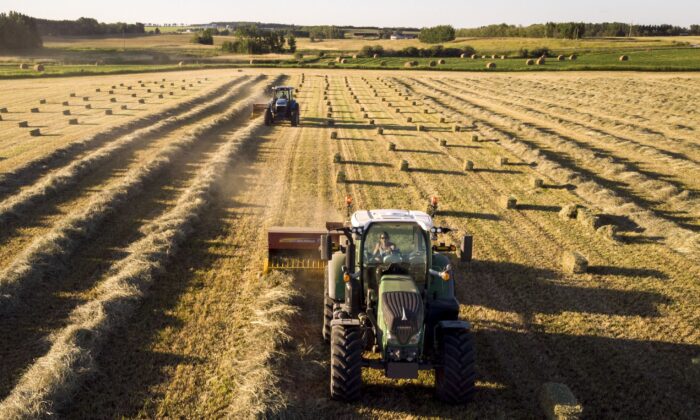 Hay is harvested on a farm near Cremona, Alta., on Aug. 16, 2020. (The Canadian Press/Jeff McIntosh)
Canada

“Tesla is not making combines or tractors—we don’t have that option. But we are doing a very good job of growing environmentally sustainable crops in the global market we compete in, and to put a carbon tax on that makes absolutely no sense,” Bennett told The Epoch Times.

“We are price takers with international competition for all the commodities we grow. We cannot set our price and push the carbon tax part of our bill on to someone else.”

Canada is among the world’s five largest agricultural exporters, and with the exception of oats and barley, the majority of its grains are grown for international buyers: 75 percent of wheat production, 95 percent of pulse production (dry peas, lentils, beans, and chickpeas), and 90 percent of canola production.

To prepare the crops for sale, many growers must dry grains in natural gas-fired machines. It’s a process that has cost some farmers four- and five-figure carbon-tax charges, such as a bill of $5,495 one farmer received that Saskatchewan Premier Scott Moe retweeted in October 2019 after a particularly wet harvest.

“I can guarantee his rebate won’t cover this extra cost,” Moe wrote.

And that was the first year of the federal government’s levy, set at $20 per tonne.

At the beginning of 2020, the Agriculture Producers Association of Saskatchewan estimated that the carbon tax would cut farmers’ net income by 12 percent by 2022 due to related fuel charges and higher fertilizer, seed, and transportation costs imposed on related industries.

A survey of the farming community released in February 2020 found that farmers estimate they will pay nearly $14,000 on average in federal carbon taxes in the first year, from April 2019 to March 2020. The Canadian Federation of Independent Business (CFIB) survey, which covered both the field crop and livestock sectors, found that 82 percent of farmers said the tax is negatively impacting their business.

At the Paris climate talks in 2015, Canada agreed to reduce its total annual emissions from 732 megatonnes to 513 megatonnes by 2030, and subsequently proposed legislation that would punish the use of fossil fuels—natural gas, diesel oil, heating fuel, and gasoline—in order to hit the target.

Fast-forward to Dec. 11, 2020, when Prime Minister Justin Trudeau announced that after his carbon tax reaches $50 per tonne in 2022, annual increments will rise from $10 per tonne to $15, until the tax hits $170 per tonne by 2030—a 566 percent increase. Under that plan, the government estimated that national emissions will reach 503 megatonnes by 2030.

“It’s going to put farmers out of business, it’s that dramatic,” said Bennett, a member of the Western Canadian Wheat Growers Association who grows lentils, canola, barley, and wheat on 4,500 acres in Dodsland, about two hours west of Saskatoon.

Across farm acreages, in addition to photosynthesis each growing season that absorbs carbon from the atmosphere, research indicates that soil sops up carbon as organics break down after harvest, which can be enhanced through low-tilling.

While a thorough accounting of how much carbon is absorbed by agricultural land has never been made in Canada, Bennett believes that the much higher amount of grain export versus domestic consumption makes the sector a negative carbon emitter.

“I would argue that we as farmers are actually a carbon sink—we sequester more carbon in our soils than we emit in greenhouse gases,” he said. “And that is something that is not taken into account on any calculation when it comes to a carbon tax at a $30 or $50 level, let alone $170 level.”

Based on the size of Bennett’s farm, soil variety, tilling, and crop rotation, Rattan Lal, a soil scientist at Ohio State University, told The Epoch Time he estimates carbon sequestration of “one to one-and-a-half tonnes of carbon per hectare,” or around 1,821 tonnes.

Every year, Bennett’s farm machinery burns through 75,000 litres of diesel, for which he’s provided an agriculture rebate. Yet he still pays the federal carbon tax, while his land sequesters 21 times the carbon belched by his tractors and combine harvesters.

In order to do a complete carbon accounting, Lal said inputs like fertilizers and herbicides must also be calculated. But typically speaking, well-managed farms in temperate climate zones or with decent soil sequester plenty of carbon.

“Sequestration means that [carbon] doesn’t escape, like a jury during a trial, but it can escape by mistake, from soil erosion, snow melt, rain, wind blowing across the land, and of course by ploughing up the land,” said Lal, who has researched and written extensively on the topic over four decades and on four continents.

While disturbing the land as little as possible, planting winter wheat or other over-crops maximizes sequestration. Dark soils like the Chernozemic soils dominant in the prairie region—which are high in humus and clay content—as well as Saskatchewan’s clay-heavy Vertisolic, are varieties that sequester a lot of carbon, according to Lal.

“[It’s] because the clay is sticky. If soil is sandy, it cannot hold carbon. In Ohio, we have soil in the lake area that came from the bed of the lake, or if you go to Texas, Houston clay is a very dark soil that holds more organic carbon,” he says.

Cattle ranchers in Canada have long argued that they should receive credits under any carbon tax regime for preserving grasslands where livestock grazes. A 2018 report by the International Institute for Sustainable Development indicated that one hectare of grassland in the Prairies can sequester up to 8 tonnes of carbon annually.