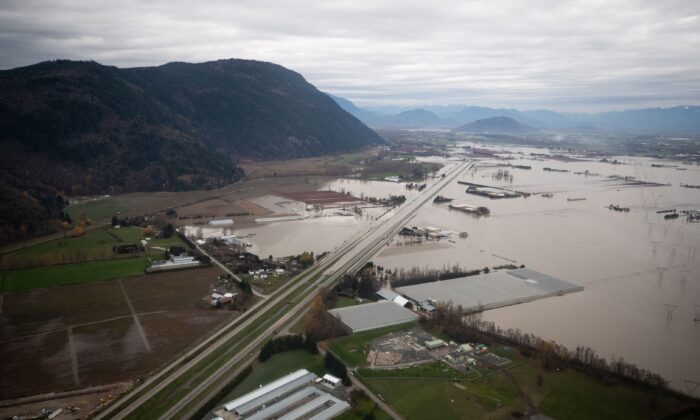 The Trans-Canada Highway and surrounding farmlands are inundated by floodwaters in Abbotsford, B.C., on Nov. 22, 2021. (The Canadian Press/Darryl Dyck)
Viewpoints

BC Floods Show We Need a Plan to Deal With Natural Disasters, Not a Carbon Tax

Globally, governments have fiddle-faddled with multiple conferences over the last 30 years in an attempt to modify the climate, with little success. Instead of trying to change the climate 50 years down the road, we need to plan on how to mitigate against weather events that seem to come with increasing frequency.

We have had little success in predicting the effects of climate change, so we need to plan for the inevitable disasters that seem to come without warning. We can, however, mitigate against natural disasters by attempting to anticipate the effects of human settlement on the natural environment. For instance, if we drain a lake to build a city in its place, we need to take measures to ensure that when an atmospheric river comes along that the lake does not fill up again, inundating the built environment. Water has a habit of always seeking the lowest point and that lake was and probably still is the lowest point.

It is somewhat alarming that control of the Sumac River at Abbotsford has been talked about for years—all talk and no action—and now we have a billion-dollar disaster that has displaced many residents. With the Lower Mainland being a major agricultural area that we all depend on for our foodstuffs, that catastrophic flood has further challenged our already compromised supply chain.

In the last number of years we have seen major floods in Calgary, High River, Fort McMurray, and just recently in B.C.’s lower Fraser Valley. As for Calgary and the Elbow River—it’s now been eight years and still no action to prevent a further flood of downtown Calgary. We need to take the example of Winnipeg and the Red River. After multiple years of massive flooding, action has been taken to divert the regularly rising waters of the Red River from habitable areas. The Town of High River has also taken measures to fortify the banks of the Highwood River, ensuring that residents and businesses will be protected against future flooding. In Alberta, various levels of government have been active with flood plain mapping and resulting restrictions on urban development within these flood zones. Those are the actions necessary to avoid future environmental concerns.

Let us take the revenue from the carbon tax and use it to mitigate the effects of climate change rather than attempting to change Mother Nature’s ways. A more appropriate name for the carbon tax would be to call it a “climate” tax.

A second way we can be more strategic in mitigating climate change on a global scale is to concentrate our resources where they can be most effective. Canada’s greenhouse gas (GHG) emissions are minimal compared to the emissions in China, India, and some of the developing nations. Let us channel our abundant energy resources to these other countries to assist them in lowering their emissions. We have an abundance of natural gas that can be shipped as LNG to assist these countries in reducing their reliance on coal and other polluting fuels in order to reduce their GHG emissions. Similarly, we have some of the best and cleanest metallurgical coal that can be exported for steel-making. Clean coal for clean steel.

Canada boasts some of the highest environmental standards in the world as well as some of the best expertise, so we should concentrate on using that expertise and those resources to assist those other nations in achieving the global objective of reducing our carbon footprint. Exporting our natural resources and technical expertise will also be a boon to our economy, which can help to pay for the resources necessary to mitigate against Mother Nature’s fury.

Let’s face it, Canada has not been successful in reducing greenhouse gases; in fact they keep creeping higher, so we need to reassess our strategy. We have had a strong signal that we need to look at strategies to mitigate the effects of climate change in order to avert future disasters. At the same time, we need to recognize that Canada’s strength is in exporting our expertise and our energy resources to those countries that can benefit from what we have to offer.

The time has come to change our focus from carbon reduction to climate mitigation.